Quiet, or you’ll taste the back o’ me hand!

Well, another school year is wrapping up at Higashi Chu. The graduation ceremony is tomorrow already. Yesterday was the last Adopt Program Trash expedition. I think these kids need to graduate more often, because they were getting more trash yesterday then on all the other times I’ve seen them do it put together.

I was walking along an irrigation canal with a couple of students when they spied some garbage in the water. They janken-ed for it to see who would go down to get it (how else would they decide?) and this guy lost…er, I mean won!! Hooray. 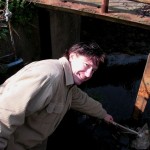 Anyway, he seemed to have such a good time venturing down into the water in his brand new sneakers, that the next garbage we came to, I didn’t even wait for the janken, I just grabbed a pair of tongs and jumped down to get it. I was probably risking life and limb by foregoing the janken ritual, but that discarded bento box was all mine!! And believe you me, I picked up the hell out of that garbage, baby!! It never stood a chance. I almost feel bad for it… sorry-ass garbage.

Today, as per the usual dilly, we had the O-souji (big cleaning) that seems to come around every year at this time. I went up to the 3rd floor to spend one last soujisession with the soon-to-be graduates and helped clean here and there between taking pictures and signing yearbooks.

Yep, they got yearbooks here, more or less like at home, except they seem to do it as more of digest version. The memorial albums, as their called, contain class pictures with names, photos and brief writings on activities throughout the year, sports club group photos and the like, but all if it pertains and is only for the graduating class. The 1st and 2nd year students get a whopping, grand total of just two things: jack and shit.

Not too long ago I brought in my Junior year, High School yearbook and showed one of my teachers and he was floored at how big of a production it was. And the fact that it came out every year and it was for everyone, not just the graduating class, was incomprehensible to him. He had never even heard of such a thing. Not sure why I mentioned it, just thought it was an interesting difference and not uncommon in Japan; there’s often things that look familiar but are still different at the same time.

After the cleaning, the students retired to their rooms for what seemed to be loose-end-tying sessions with teachers. Last minute notifications were made, compilations of students’ writings were handed out, and even more yearbooks were signed.

Then came time for the graduation ceremony rehearsal. Now, I can appreciate the need to rehearse this kind of thing, but this was unnecessarily epic. There are numerous times throughout the ceremony when the students must stand up from their chairs, bow, then sit down again. It happens enough that it was considered important enough to practice over and over.

“Stand! Bow! Sit!” The teachers conducted it three times. Then Kumate-sensei filled in as the Principal and walked up to the stage and they did the “Stand! Bow! Sit!” routine again, but with someone standing on the stage, acting as the Principal. All kinds of variations were done, apparently to simulate the different stages of the ceremony tomorrow. Doing it with someone taking the stage, doing it with someone leaving the stage, doing it before a song. Then they brought in the 2nd year students and had them sit in their chairs behind the 3rd years and they did it a couple more ways. By the end, they did it no less than (and I was indeed keeping count) twenty-five times. Twenty-five!!! Okay, look, these kids are Japanese, have lived in Japan for at least 15 years now and are about to graduate Jr. High… if they haven’t learned how to bow yet, they ain’t going to fuckin’ get it now!!!

Finally, there was one final uniform check to make sure skirts weren’t too short and shirts had all their buttons and the day was over, save some more yearbook signing, of course. Everyone is starting to get emotional already. It was really cute when Ishii-sensei was announcing to everyone at the end of the chorus practice that it may be difficult to sing such an emotional song tomorrow in front of everyone’s friends and family, but to try really hard not to cry, but she couldn’t finish the announcement because she started crying! It was so cute!! Dammit, she’s sweet! ^_^

So that’s that and we’re all ready for the big day tomorrow. I just hope it doesn’t rain like it did last year, that was weak.