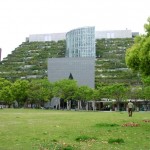 Across Building in Tenjin

I have learned a universal truth while in 4th period class today. Children all over the world, no matter their country, economic, ethnic, religious backgrounds or what gaming console they use, they all…. pick their nose and eat it. I mean, in the middle of class for God’s sake. Shameless.

Of course, I’m one to talk. I was five minutes into 5th period before Dickhead-san sitting in the front row who had been giggling since class started, felt it was finally time to inform me that my fly was halfway down. I can’t wait until that guy’s homework hits my desk for grading. BWAhahahahahahaha!!! I’m shameless.

I’ve been getting a few really good ideas coming in regarding what to award as souvenir-esque presents instead of postcards, so keep em coming!

So I’ve decided that my latent filmmaking skills have been latent long enough and it’s high time I started dusting them off and putting the obscene amount of free time I have in this job to work to good use. Thus, I’m about to get a video camera with the intention of making little films here and there and perhaps something big somewhere along the line.

Apparently, by ‘down the line’ I mean now. The Fukuma Crew (me, Fletcher, Ben and Rory) have already started putting together ideas for a short film probably in the neighborhood of 30 minutes. I’m not going to say much yet, except that we’ve got some great scenes planned and I’m just hoping that they’ll be funny for normal people who happen to see it (i.e. I hope it won’t be a bunch of inside jokes).

I’ve already got the basic storyline set and am a week or less away from getting the camera so look forward to something fun coming soon. It’ll probably be kind of event-like here on Flap, like with script excerpts and blooper shots appearing on the site as they come in and stuff. Should be a lot of fun. I just hope I’m biting off more than I can chew [sic].