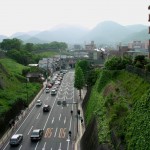 So, I chilled out in Kumamoto over the four-day weekend, thus my late web appearance this week. Actually it was only a three day weekend, but in honor of this weekend’s X-Men 2 release, I used my mutant powers of nenkyuu (paid leave) to make it a four-day weekend instead. What can I say, I’m a God damn hero.

I’ve probably mentioned my fondness for Kumamoto before, it’s actually a lot like Portland in many ways. They’re both decent-sized burgs that’re often mistaken for being little podunk, middle of nowhere villages, when in fact, they’re vibrant, thriving cities with lively art scenes, lots of pretty parks in the middle of the city, nice rivers running right through the middle of them, etc etc.

On Monday, I had some free time while my friends were off doing whatever it was they had to do, so I just walked around town and took some pictures. I figured it might be considered rude if I didn’t share some of them with you.