Jump to the jam, boogie-woogie-jam-slam. 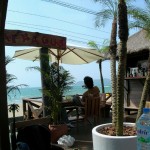 Wow, fantastic weather here this weekend. Me and fellow ALT Helen went to Fukuma beach to have fun, but since the wind was far too intolerable to be…. tolerated we packed up after a mere 10 minutes and started to head back, bitching and moaning about how nice it was and we wanted to be at the beach but the wind was just too bad (the last straw was when I opened my Shakespeare book and the wind ripped out the table of contents and carried them across the sand a few hundred feet before I could catch up. I’d say that warrants a growling frowny face: >:-( Grrrrrrr.

As we were walking along said beach, we came across the newly remodled Pantai Bagus (we frequent a sister-restaurant of theirs) and stopped in…. and it rocked!! There was no wind at all, just sun, palm trees and all the Moscow Mules you could drink. Absolutely fantastic as the view from our table in today’s photo shows. Just look at how relaxing it looks for God’s sake!! And this is in my town! Sorry Dad, I’m am indeed trying to rub it in, I confess.

Of course, this was before the rain and humidity started today. You know what sucks about 90% humidity? Not the dampness. Not even the heat. The bugs. They sense that you’re already feeling really gross and sticky so they seize the opportunity, in spite of their size, to leverage their annoyance factor and piss people off. I’m going to have to take a different route to school for a while because the one that goes along Saigo River that I usually take, while still perfectly acceptable for those who enjoy inhaling insects more than air, has gotten just too insufferable for yours truly.

And that’s just the beginning. Today the oddest thing happened at school. Right after second period ended, the middle courtyard was overcome with a butt, not a swarm, but a fucking butt of bees. It was crazy. I was cursing myself for not bringing my camera today! No one knows where they all came from all of a sudden or what attracted them to the barren courtyard of Higashi Chu, but people were freaking. All the windows had to be closed for most of the day, which as you can imagine in 90% humidity, SUCKS!!

By lunch time the bees were all over the shed in the middle of the courtyard and were starting to build a nest. Leave it to children to be complete fuckwads, they started chucking their umbrellas out the second floor windows at the roof of the shed where the bees were all swarming. “Hee, hee. Death is fun, let’s piss off The Swarm!!” Eventually the principal called in a freaking beekeeper who came and put on his silly netted hat and sprayed some smoke-stuff out of a can at them untill they all got in his special 007 Beekeper Boxes and toted them away.

Just another day at Higashi Chu.