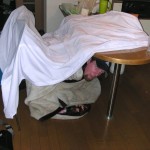 Happy End of the World Day!!

Of course, I’m referring to the dubious prediction by Pana Wave Labratories that a Big-Ass Earthquake™ is gonna come along (due to the passing of a previously unknown 10th planet, no less) and bitch-slap Japan’s geographical state of affairs upside the head. It’s almost quitting time at work and nothing yet. For some reason, I’m not all that unhinged about the whole thing. Fletcher on the other hand is really getting into the spirit… freak.

You’ve gotta hand it to Japan though, they can do doomsday cults in style. We get a huddle of broke, flannel-wearing hippies chillin in a “compound”(read: a couple of rickety shacks in close proximity) at Waco, while in here in Japan they get a cavalcade of stylin’ white limo-buses that cruise the hills looking for a cool place to camp out and make some s’mores.

Yep, we got just about every major element of… well, just about any anime show you’ve ever seen come to think of it.

Just don’t get me started on the whole white cloth thing with this group though, it’s so dumb it makes me want to take a nap. I understand that some humans are just going to be stupid no matter what, but they’re not helping anyone’s credibility by claiming that dressing in white is protecting them from harmful electromagnetic radiation. I’m not saying that electromagnetic radiation isn’t harmful, that would be ignoring the evidence. But last time I checked, visible-spectrum light wasn’t near the top of the list of “Stuff That’s Gonna Git You Perished.”

Idiots. All of them. God, I can’t wait to watch the news tomorrow morning.