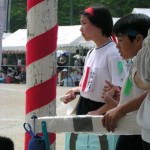 This site often switches roles in the kind of things I write. Sometimes it’s a documentary, sometimes a journal, sometimes a language book, and sometimes, like today, it’s an editorial.

Make no mistake about it, there is not so much as a sliver of objectivity in anything that follows. This is ‘me spouting my opinion to those who didn’t ask for it,’ in it’s purest form. Now that that’s out of the way, let the taiikusai-bashing begin.

Taiikusai basically translates as Sports Festival, and it’s a long-standing and indeed famous part of Japanese education. Everyone has had a Sports Festival in Elementary, Jr. High and High School and they usually seem to be one of the fonder memories of most of the Japanese people I’ve spoken to. Well not me. I hate them. I loathe them with the atom-crushing intensity of a neutron star.

Just to clear things up a bit, I’m not Japan-bashing. I have a long history of loathing extracurricular events in school, particularly when they’re related to sports, long before I had an interest in this fine nation. I somehow found it insulting when my entire high school was called to the gym for an hour as all the “cool” kids did silly skits and chants explaining to us why our blood should be boiling because our football team was going to play some other high school’s football team, which would surely change the political landscape of the entire universe in the span of the weekend. I didn’t like football. With the exception of my friends Nat and Jason, I didn’t like anyone who played football. And as long as the subject wasn’t English (ironic, ain’t it?), I would have dearly loved to have been in any class doing something to further my education rather then sitting on sticky bleachers listening to mind-numbing, school-spirit propaganda.

To help numb the pain, I took my camera along and snapped pics like crazy with the sole goal being to use them as fodder to later make fun of this Complete Waste of Life™, which takes 2 months of teacher planning and one week of almost a thousand people doing who-knows-what, resulting in… a dirt field that was already there to begin with and some colorful headbands.