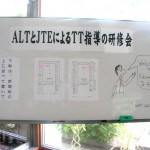 So yesterday was the demo class. There were signs all over the school so the guest teachers could navigate. They all seemed a little formal and boring though, so I took the liberty of scribbling a doodle on the white board at the entrance. My artisitc abilities are as breathtaking as my handwriting, I know.

For some reason everyone in the school knew about it. I expected the teachers to know, but all the students knew and kept wishing me good luck as well. If I heard one more “ganbatte!!” I was going to start chucking people out windows. We weren’t blasting off to the moon for god’s sake, it was just a stupid class.

Did I mention that there were a lot of people at this thing? Sure it doesn’t look that bad by looking at the photos but when all these people, as well as your boss, as well as their boss from the Fukuma Board of Education, as well as all their bosses from the Fukuoka Prefectural Board of Education, are watching and taking notes on your every move for almost an hour, it gets a little nerve-wracking. Nakahara-sensei was also there video taping the whole thing as well (he says he was told to by the board of education) so they could reproduce a record of my pain should they ever so desire. I had not known about that. 🙁 As well, with that many people in the room it was, as we in the education biz like to say, hot-as-balls! 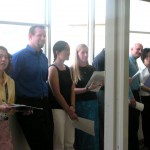 There was a meeting afterward which was dumb. Everyone got a chance to say what a great lesson it was and how we were great, blah blah. Just goes to show how messed up the Japanese Ed system is when a lesson can be as bad as it was and no one notices. The only good thing was that I got to oogle over the hottie Japanese teacher that had been standing on Fletcher’s right durning the class. H-O-T-T, HOTT!! o_O

Long story short, it’s over. And wonder of wonders, today was the first morning in a week that I haven’t woken up with a headache. Coincidence?