Yeah, so look who finally decided to update his fucking web site. Good lord. Bringing you up to date seems only the polite thing to do, yes? That said, I guess I might as well start off with…

What I’ve been doing.

Almost right after the last entry of substance, I came home one day to find this bug on the stairs of my apartment. How cool is this little guy, seriously? I’ve never seen anything like him. I’ve gotta wonder though, if there’s some kind of law of diminishing returns coming into effect with antennae that long.

Not long after that, we had the last prefectural JET meeting of the year. 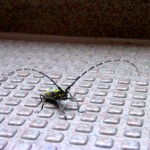 When it was done, Fletcher and Big Matt went to a park in Tenjin and played some chess while drinking more beer than their livers would have probably liked. 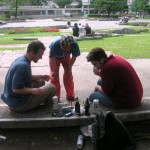 I just dropped by to say hi and see just how snobby and elitist they looked playing chess in front of everyone there, including this random homeless guy who really liked to smile at me. Weird. Anyway, I didn’t stay for long because there was an exclusive JET party at the Dark Room later that night, and I needed to prepare. 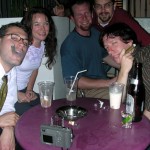 In other words, I needed to get cigars. It’s been aaaages since I had had one and since I had just recently found a shop that carried them, I figured this would be a good opportunity to try my own brand of elitist snobism. And boy-howdy did it work. Cigars are damn-near impossible to find in Japan because apparently everyone is content with being addicted to the cigarettes that spew from the innumerable streetside vending machines like a pried-open fire hydrant in Harlem on a hot summer day. Lame attempts at poetry aside, everyone thought I was quite elite to be sporting cigars so I consider the mission largely successful. Take that, chess-sissies!! 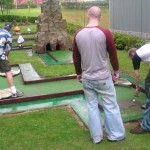 The following week our good friend and fellow JET Gareth had a bit of a ‘guy’s day out’ party to celebrate the impending end of his single days. Yes, the poor bastard is getting married, and what better way to mourn the end of his freedom than by going to an amusement park and running each other off a circular track while driving go-carts? 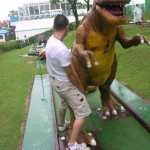 I mean, there was more than just go-carts, such asLameass Dinosaur Mini-Golf™ (the golf was so bad that New Zealand Matt had to start humping one of the T-Rex obstacles just to stay awake!) and the absolute slew of rollercoasters available for the riding at Mitsui Greenland Amusement Park. 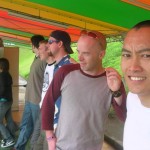 I’ve never been much of a rollercoaster person. That’s not to say that I don’t like them. I wouldn’t have been able to say whether I did or not since I had never ridden one prior to this day. The whole thing just seemed like a bad idea and tragedy in the making. Thankfully I have better self-control now that I’m older and on this particular Sunday, I was going to be damned if some silly, preprorammed biological imperitive to continue living was going to get the better of me and I rode every last rollercoaster we could, including one of those crazy ones where the seats hang down from above so your legs are flying through the air. Fun-as-Hell is the conclusion that I have finally come to. Take THAT, stoopid survial instinct!

After being sufficiently run into the ground from trapsing all over a huge amusement park all day, we retired to Gareth’s pad once again for, what? All together now: 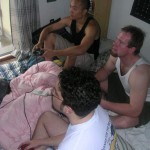 I should mention that during that day at Greenland, I had come down with a nasty sore throat that, had it been a little worse, would have ruined my day. By the following Monday, I was sick as hell. My throat hurt and there was some weird blister on the tip of my tongue. Turns out, get this, that the two things were separate; I had both a viral and a bacterial infecton. In my MOUTH of all places. So I spent the entire week at home, in utter agony, cursing any time that I had to eat or be conscious. So that was the sickness I was rapping about a few entries back. Now you know.

At some point in my travels, I saw this bizarre cigarette lighter at a restaurant checkout counter, which was shaped like a pig and shot double-flames from it’s nostrils. I’m not sure any comment I could make would enhance the surreallity of this object. 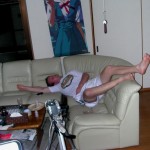 Moving right along, Fletch and I were watching Star Trek at my place, as we are apt to do at times. Inbetween episodes I took a bathroom break and when I came back I was treated to this foul spectacle sprawled on my couch. My pain runs deep, share in it. SHARE IN IT!!!

Hmmmm, well it’s getting late and this is taking much longer than I expected so we’ll just call this part one and finish the rest of what I had to say tomorrow.