It was nice to talk to you on Messenger the other day. How is Portland? Been up to the Nob Hill area yet? It must be nice to be back home and be able to see all your friends again. You’re probably missing Fukuma a bit too though, eh? No use denying it, I could tell by the way you called me a “lazy, shit-sucking bastard for not updating the site” and thereby keeping you out of the proverbial “loop.” Well, here’s what’s going on in Fukuma.

My bike recently got a flat tire so I took it around the corner to that ass-bandit that runs the bike shop right next to Hair Flap. He told me that my tire and tube were worn out from too much use (which makes sense, since I haven’t changed either in two years), so he suggested I get new ones. ¥5000 down the tubes.

Two days later I got another flat, so I took it back and said, “Damn you, you swindling charlatan!! Fix me tire or you’ll taste the back o’ me hand!!” He did and then charged me another ¥1000. <sigh>

By the next afternoon, it was flat again. I therefore assumed that something must be wrong with the rim itself and since I didn’t feel like shelling out another ¥5000 for a new rim (spending almost $100 on that P.O.S. bike is NOT something I’m going to do anytime soon), I decided to just get a whole new bike that wouldn’t continually crap out on me. So I got the badass new mountain bike that you see in this picture, complete with front and rear suspension, adjustable-on-the-fly brakes and a handy ejection seat. It’s fast as hell and I frequently keep up with traffic while inside Fukuma. I have dubbed this new ride the Flaming Buffalo. 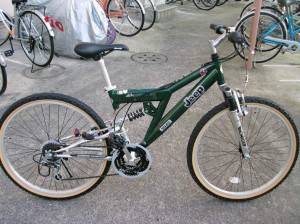 I decided it would be nice to show you that Fukuma is doing pretty well, so with camera in hand, I hopped on the Flaming Buffalo and rode around town to show you that things are just as you left them.

Here’s the view from right outside the door of your old apartment on the good ol’ 7th floor. 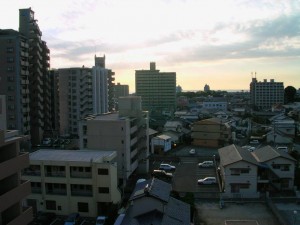 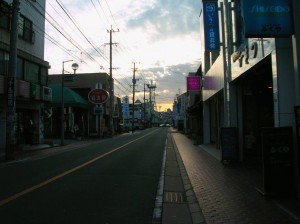 Here’s that one kid that we don’t know and have never seen before sleeping on the train as I’m sure he always does which would probably have grown on you if you had seen it every day over a long period of time what the hell is this sentence going on and on about anyway it’s just making no sense and getting more and more random as it goes on and without any helpful punctuation such as commas or semi-colons isn’t it? 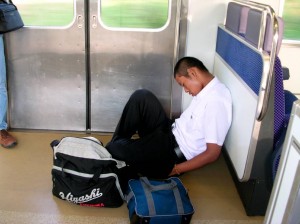 Here’s the beach with a typical sunset as seen from Pantai complete with our mystery oil(?) rig. Remember these? 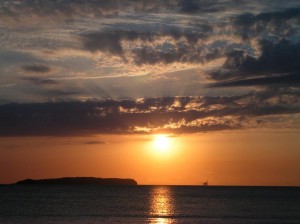 Here’s another sunset shot that was just too cool not to include in this update. 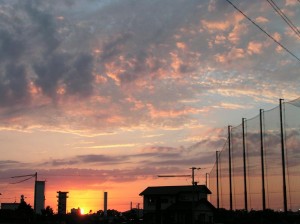 Well, as you can see, Fukuma is doing just fine, though I’m sure it misses you as much as you miss it. Take care.

P.S. – I don’t really call my bike the Flaming Buffalo. That would be gay.