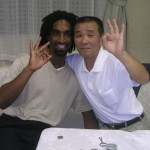 I think it’s common knowledge that my long-time partner-in-crime, Fletcher has finished his stint on the JET Programe and has returned to the fair, metropolitan eden of Portland. In his stead, Fukuma has recieved the honorable Malik, hailing from New York. He’s been here for a couple months now and has been getting settled in quickly after being overwhelmed by his first enkai which just so happened to be in his honor.

Since people I know have a tendency to show up on the site from time to time, I thought it’d be a good idea to introduce Malik somehow and what better way to avoid time and effort consuming writing on my part, than to simply interview him over AIM and see what he’s got to say about his impressions on things so far.

In retrospect, it’s not a great interview since it doesn’t really tell you a whole lot about Malik himself, but I’m sure you’ll get to know him well enough. That being said, here’s what was said by the people who said it.

Me: Okay, so you’ve been in Japan for what, two months now? What three things have surprised you the most so far? If you can think of three things, that is…

Malik: Hmm, let’s see. The number of women whose feet have been deformed from wearing heels. A lot of them have the weird bent-over, pigeon-toed stutter-step. it’s like an epidemic and no one seems worried.

Me: Yeah, that’s kind of annoying to look at, eh? I should post a picture of that sometime so people can see what it looks like. I’ve been told that it’s kind of desirable actually, like it’s considered to be “cute.”

Malik: Yeah, that’s just strange. But I have to say, once in a while you see a chick that’s got the right body for it.

Me: I’ll leave the picture of THAT example up to you.

Malik: Haha, I get my camera this weekend!

Malik: Yeah, I guess coming here you expect it to be futuristic, or at least fairly advanced, but aside form the consumer electronics it’s kinda primitive don’t you think?

Me: Yeah, I agree. Especially in homes and such. It’s like, “No insulation and you’re still using kerosene space heaters??” WTF??

Malik: The houses, the way women are treated. Women here are like 50-75 years behind in terms of rights.

Me: Yeah, that’s a good point too. At elementary schools, I’ve invited girls to come play soccer with me and the boys at recess and they’re like, “We can’t, that’s a boy’s sport.”

Me: I was speechless. Try telling that to a girl the same age in the U.S. She’d laugh her head off.

Malik: Right. And they giggle so much, trying so hard to be feminine.

Me: Not to mention the ‘coffee wenches’ in every office setting I’ve ever been in. “Hey, woman! Go make me some coffee!”

Me: Haha! I think that deserves a little more explanation. Is your mom reading this btw? 😛

Me: Wow, that’s new jargon for me. But yeah, the “mosaic” is over anything considered ‘indecent.’ Ironic considering the sheer volume of stuff that’s out there. It’s like, Isn’t it a little late to block out indecency when bookstores and phone booths are saturated with the stuff?

Malik: Right, the mags are everywhere, you can read one in Starbucks!! Plus, every scene is faux-rape. How can you say a vagina is indecent but raping it is okay? Wtf??

Me: You’re catching on to the maddening contradictions already, buddy. 😛

Me: Okay, next question. Coke or Pepsi?

Me: Commie. What are you missing from the U.S. so far? Anything?

Me: Hmmmmm, interesting use of quotes. I’ll let the literary types delve into the symbolism you may mean with that. Oh, and I meant to do this question first but forgot because I’m a silly, silly boy. Is there anything you want the readers of Hair Flap to know about you since I’m sure they’ll be hearing about your more notable exploits from time to time?

Malik: That soon I’ll be starting my own website, and it will put hair-flap.com to shame. 😉