So I got up and came into school an hour early today to finish up the worksheet for today’s phonics lesson (for which I have three classes on this fine Tuesday morn). I finish up yet another masterpiece of a handout, after reading which, it would be impossible for anyone to not understand the concept of how to voice most consonant clusters.

However, upon jacking my laptop into the printer I realize that I haven’t reinstalled the drivers for the printers at school since wiping my drive to install 10.3. No problem, except that the internet has been down for two fucking weeks now while it’s supposedly “upgraded”. Maybe it’s just my strange West Coast slang, but I usually use the term ‘upgrade’ to refer to something getting better, not retrograding to the situation before said ‘thing’ even existed.

So basically, I’m fucking pissed off because my students have to go without a worksheet to help them today because this office can’t seem to join the 21st century. Grrrr, I need more coffee… and a sledgehammer.

Well, too much bitching isn’t good for anyone, so now I’ll balance out a bad with a good; Japanese hip-hop more or less sucks. Okay, that sounded like another bad, let me finish. 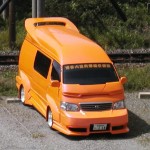 9.5 times out of 10 (also referred to as 95% in some circles) so-called J-Hip-Hop falls short of what most humans refer to as music. I mean, it’s bad to begin with, but then on top of that the way that a sad majority of J-rappers try to come off as hardcore bad-asses just gives me the runs. 50 Cent makes some of the worst “music” (and I use the term loosely here) I’ve ever heard, but the guy’s been shot nine freaking times and he’s still going. That qualifies as hardcore. Tupac got shot like twenty times (okay, four actually) and he’s dead! That’s even more hardcore-er!! Making your van look like this, however, does not qualify you for a Hardcore-Club Members Card. (Making your van look like this though, might. ^_^ )

Though they’re way past done making music, I always liked East End X Yuri because they just made catchy tunes and didn’t pretend to be anything more than a little hip-hop band having fun. That’s cool, I can deal with that and I strongly recommend trying to find some of their tracks on whatever flavor of file-sharing service you prefer (the song BOOTS, in particular always gets me dancin’ in my seat).

The reason I brought all this up is because, as I said, most of J-Hip-Hop sucks. Every once in a while, someone sneaks in a track that isn’t actually half bad, or at least I think so. Dragon Ash, while normally falling into the category of “God we could be so hardcore if only we weren’t such pansies” it seems screwed up and accidentally made a decent track called Grateful Days, which I’d like to throw up for your listening pleasure.

Granted, most of the goodness comes from the Smashing Pumpkins loop they mixed in there, but it’s still just kind of a pretty song. I submit it for your approval. Lyrics in Japanese can be found here if you just have to sing along.

Moral of the story: Even if something 95% sucks, there’s still 5% that’s worth seeking out.