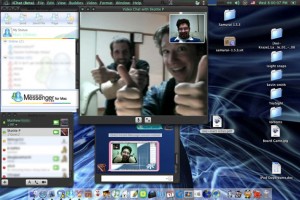 It’s so cool how some of the promises of technology are coming true after all. Video phones are still a little ways off but iChatAV is proving to be pretty damn cool. For example, tonight instead of writing a proper update for you fine people I had a fellow ALT here in town, Connor, come over and watch Thunderball on TV. The part that puts my jaw on the floor is that we were watching it with a friend that lives about 40 minutes away.

Yeah, we had the TV on to James Bond and 30km or so away Big Matt joined us via a video chat. While me and Connor were watching on my couch here in Fukuma, Matt was on my computer screen streaming in real-time video as he watched the same movie in Mizumaki, all of us making snide remarks and off-color jokes as if we were all sitting right there on the same couch.

Maybe it’s a sign that I’m getting old (yeah, right), but this utterly pedestrian use of impressive, modern technology really made me realize what a cool time we’re living in. Imagine trying to explain to your grandparents in any real way that you watched a movie with two of your friends even though one of them wasn’t anywhere near your home and see if they don’t tell you to stop talking rubbish and massage their bunyons.

Technology = good. Now where the hell is my phaser, dammit!?!?