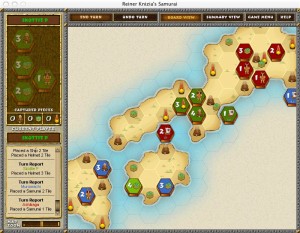 This is one of those things that qualifies as both Japan-related and random irrelavent-ness-itude. (I deny all claims that my English has atrophied. As you can see, I can still use big word. s. )

As most of you know, one of the axioms I define reality by is Video Games = Good. This goes for something with mindblowingly astounding graphics that makes smoke pour out your Gamecube, or something as simple as a strategy board game. Today, I would like to point out a shining example of excellence in the latter.

I recently stumbled across a game called Samurai, available at this site, which is simply superb. It’s a strategy style game similar to Risk, but more simplified. It’s set in feudal Japan and you play the role of a warlord vying for pledges of support from the various regions around Japan in order to eventually become sovereign of the nation. You do this by placing hexagonal pieces on a map of Japan that appeal to different castes in society. Of course there are various wildcard pieces that keep the strategy varied and interesting.

The game itself is just well-designed. It’s easy enough to learn quickly, but also varied enough that it can get tough fast (especially with 3 or 4 players). The beauty of the game though is in how goddamn well it’s made! Everything about this game is a pleasant enough experience that clicking on the icon to start it up is like taking a hit off the Peace Pipe (sorry, I watched Shanghai Noon last night so I’m in an pseudo-Old West frame of mind). The layout of the game window is simple and ordered and everything is clearly labeled so you’re never tempted to even look for a manual to find out how to do something. When playing an online game with someone (which is a snap, thanks to the server provided by the company) there’s a handy chat window right next to the map so you can talk trash to your opponent while stealing his religious caste support just outside of Kyoto. “That’s MY budda, you trecherous samurai bastard!! MINE!!”

The map of Japan is gorgeous and even the backgrounds in menus and whatnot are pretty and soothing. Soothing you say? I didn’t even mention the music. It’s like aural incense, nice soothing and totally conducive to relaxing your mind and getting into the game. It gets a tad repetitive since just the same piece loops over and over again, but you can turn it off if it gets too annoying.

In all honesty this is one of the slickest, most well made games I’ve played on a computer, and it’s shareware!! Some of the bigger game companies could learn a thing or two from the nice folks at Klear about how to make a solid, well-thought-out game rather than just hitting you in the face with the 3D-graphics 2×4. Not to mention they’re customer service is great. Big Matt was having some problems with the service Klear uses to handle their credit transactions so he eventually contacted Klear directly and they not only hooked him up with a solution within one email on the same day, but also promised they’d lay the smack down for the hassle he endured. Klear = Kewl.

The game is $20 and runs on either OS X or Windoze (specific requirements are here) and I have to be honest, I have no problem shelling out for a game that’s this well made and this much fun especially when I know the money is going to nice people, nor do I have a problem recommending you do same, should this be the kind of game you enjoy. I wonder if they’d like to add a “Recommended by Hair Flap” badge to their site. Hmmmm, I’ll have to ask them about that.