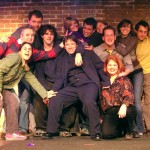 After two months of rehearsal and production on the film side of things, and two weeks of performance, our multimedia production of Trainspotting is finally over and done with. The review was a bit of a mixed bag, but our audiences grew every night with the last showing being packed and everyone I spoke to not only said they enjoyed it, but really seemed like they had had a good time. (Yes, that’s me, dead-center in the cast photo. Don’t ask me why I ended up with that dubious honor.)

I know I’ve only mentioned the play in passing, but what we did was produce the stage version of Irvine Welsh’s infamous novel Trainspotting (which was a play before it was a film). As we were putting it together though, we knew we faced two main hurdles in putting on this show successfully:

1) A majority of the play (and the novel for that matter) is straight monologue, with many instances of one character going on for pages at a time about something or another.

2) Like it or not, we would be competing for mindshare with the movie version, which is what most people think of, myself included, when they think of Trainspotting. 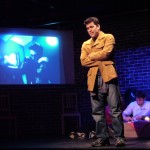 So we figured that if we took a more non-traditional approach to theater and melded video and still photo segments with the on-stage action to both break up the monotony of all the monologues while at the same time keeping some of the in-your-face pacing that people associate with the movie. So this film/photo aspect is what I was in charge of, earning me the title of Media Director. If it showed up on the screen, that’s mine!! Perhaps I’m biased, but I think it turned out damn fine, which has a large part to do with the awesome cast we had. There wasn’t an out-of-control ego in the lot of them and they made it such a joy for this to be my first real project since graduating from film school.

I know this doesn’t really have a lot to do with Japan, which is why most of you come here. But I wanted to make two points with this bit of news. First, I have a very good excuse for keeping you hanging over the past month or so that I haven’t been updating (which doesn’t excuse the fact, and I’m grateful that those of you that still drop by to see if my monkey-ass has updated). Second, with a little help from my friends, I’ve put my skills to use and we’ve put on a show.

The whole three years I was in Japan I was dreading coming back to the US, even when it was just a distant concern years in the future. As things were winding down, I was pretty glad that I was going to be wrapping up with JET, not because it was bad, but just because I had gotten my fill of teaching. The thing was, I really didn’t want to leave Japan. I was struggling for a long time with all the other possibilities that I could have pursued that might have been able to keep me in the lifestyle I was so accustomed to, in a place where I really like to live said lifestyle. Even if that meant finding a job teaching in a conversation school in the short-term, I was thinking I was about ready to do it. I mean, what was waiting for me in the US? Record-high unemployment rates and three years of post-uni experience that no-one would give a rat’s ass about? Fuck that. I was ready to stay and take my chances.

The only thing that was bothering me though, was what I was really jonesing to do and which wasn’t really working out. I don’t have this tortured soul of artist thing where if I don’t create and express my soul I’ll wither up and die, I just really enjoy making movies. If you’ve never done it, believe me, it’s fun as shit! And while I could have done some little solo projects in Japan, or maybe hooked up with my college-buddy Yuusuke who now lives in Tokyo and made something with him, I really don’t think I could have ever gotten anything off the ground in terms of a film career. The fact is, I’m a foreigner, and one with non-fluent language skills (which would have gotten better in time, granted). But in speaking with Yuusuke, it seems that the Japanese film industry never would have accepted someone in my position, be it due to my language ability, nationality or even my age (I guess if you’re 30 or over, forget about ever getting in on that business).

To be honest, this wasn’t the final straw that made me decide to come back. I could have been perfectly happy a ‘good enough’ job teaching or whatever, hopefully building my language skills up enough to move onto something else, perhaps in a government office capacity, directing intercultural initiatives and whatnot. But that basically would have happened in the sequence that I just described; biding time while studying for something better later on. Nothing wrong with that.

BUT, if I made the move and came down to Charleston, there would be a gamble. Maybe something would work out, maybe it wouldn’t. And better yet, I’d be doing so with friends who are on the same page as I am. So I packed it up and here I am. We’re still hashing out future plans for plays and movies, what we’d like to do and how we’d like to do it, who’s going to be in charge of this and who’s going to take care of that, etc etc.

Nevertheless, the fact remains; I’ve barely been in town four months and people have paid to see my work on the screen (and the work of others on the stage, I shouldn’t neglect to mention). Early indications suggest that the temporary sabbatical from the lifestyle I love and the place I love to live it, might have been the right gamble for me to have made after all.

More to come this weekend. (No, really. I’ve already started writing it. Truuuuuuust me.)