Get Ye to a Mountaintop: Osaka Edition 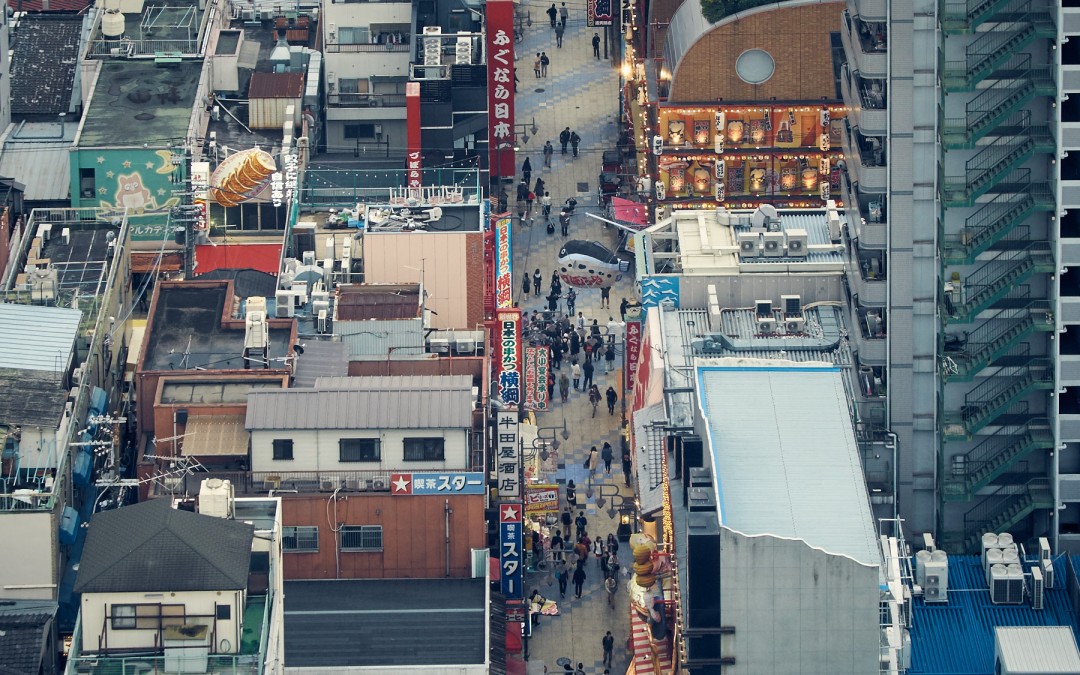 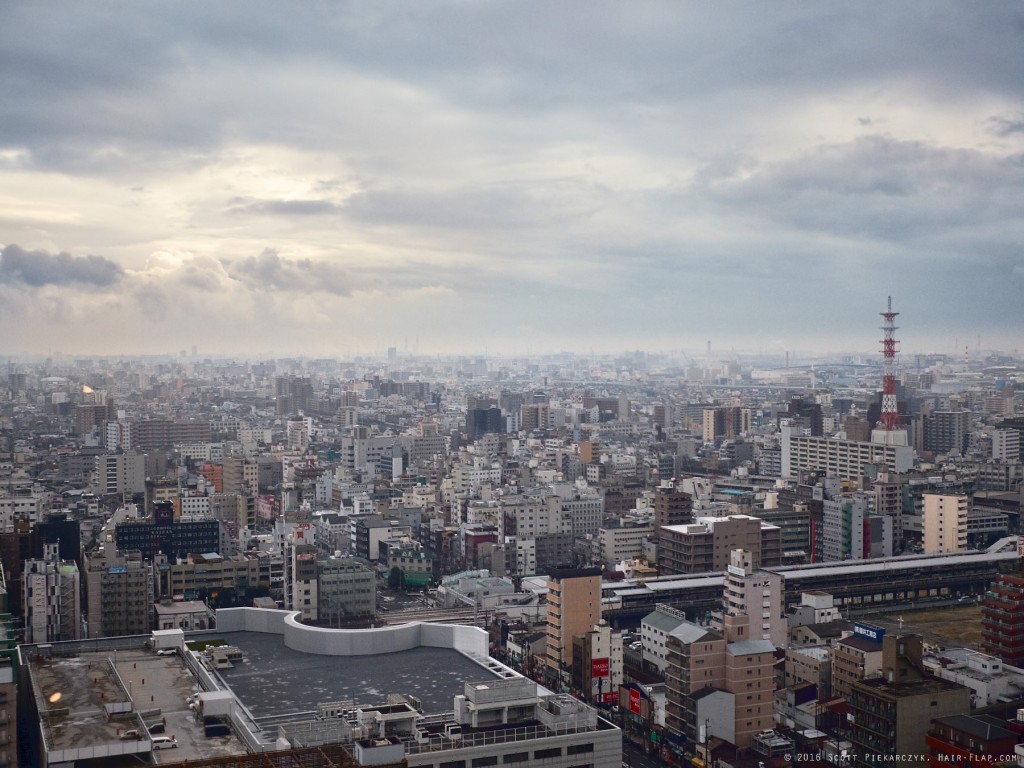 As I’ve mentioned before, when I’m in a new place for any length of time, one of the first things I like to do is get up high and get oriented to the surrounding geography. Sure you can look at a map, but it’s just not quite the same as eyeballing the lay of the land to really get a feel for it once you get back down there on the ground. This last weekend I was finally able to get some altitude and check out Osaka… well, part of it anyway. This city is huge, after all.

We had occasion to go out and do some exploring as Mary’s main staff have all arrived now and many of them have never been to Japan, so we wanted to give them some sights that they couldn’t get back home in the States. To that end, we met as a group and strolled out to Tsutenkaku Tower (just rolls off the tongue, doesn’t it?) which at 100m tall isn’t the biggest structure you’ll ever see, but it’s built for it’s 360 views and is comparably cheap to many observation sites at a mere ¥700. 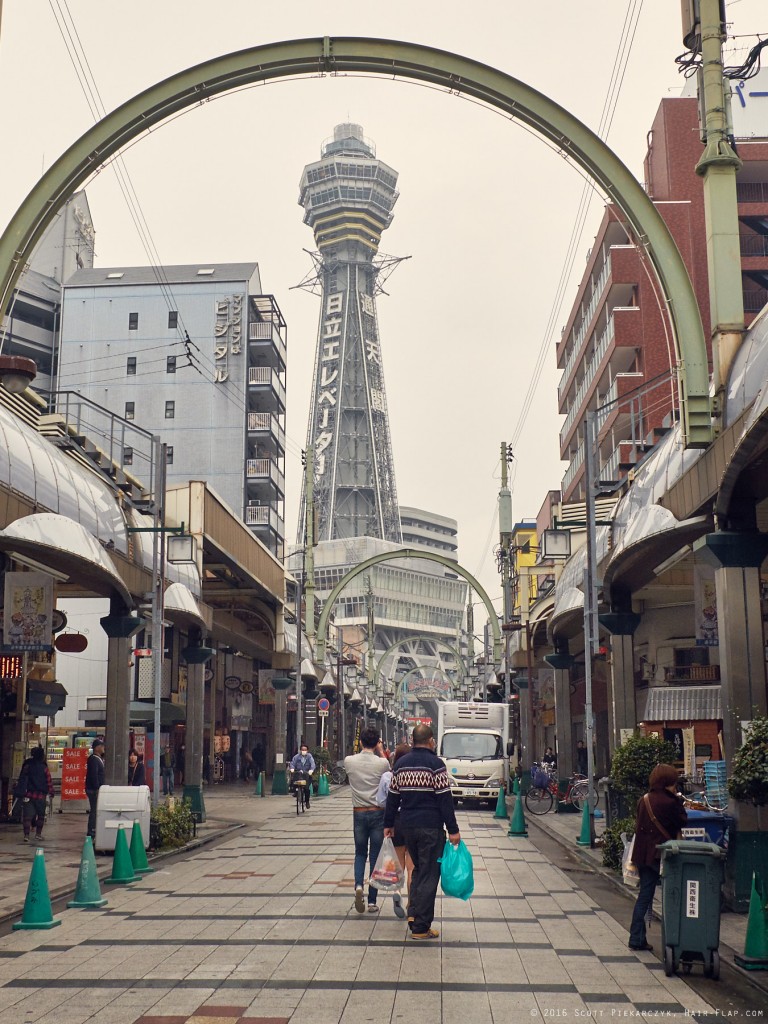 And if that wasn’t enough, once inside the ground floor, we got treated to a free, 3-song performance by a local grandma band (yes, of course you read that right) called Obachyaaan (which is like ‘granny’). It was absolutely hilarious and fun and gives a really great taste of Osaka from everything I’ve seen and heard so far. By which I mean, people here apparently tend to be louder and laughier and care-lessier and all around more colorful than in many other parts of Japan. Look, here’s a few clips of their show from my phone (hence the crappy quality, gomen!).

And apparently they have a TV ad campaign for a car dealership (I think that’s what it is). Not sure if it’s a national spot or what but trust me, these gals are laying on thick with the Osaka dialect.

UPDATE: That ad seems to be gone on YouTube now, so here, have the video version of the above song, which is about 1000% fucking legit!

Anyway, after that detour we made our way to the top of the tower and drank in the vertigo. 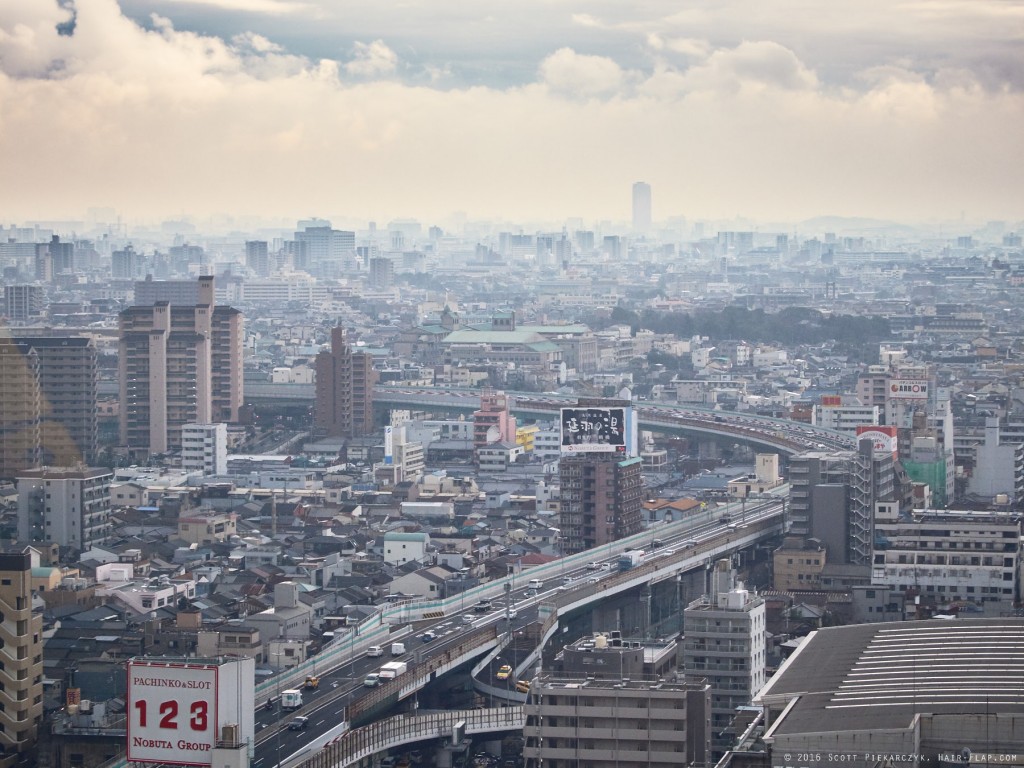 I don’t know why whenever I go up in observation decks it’s always cloudy. :/ 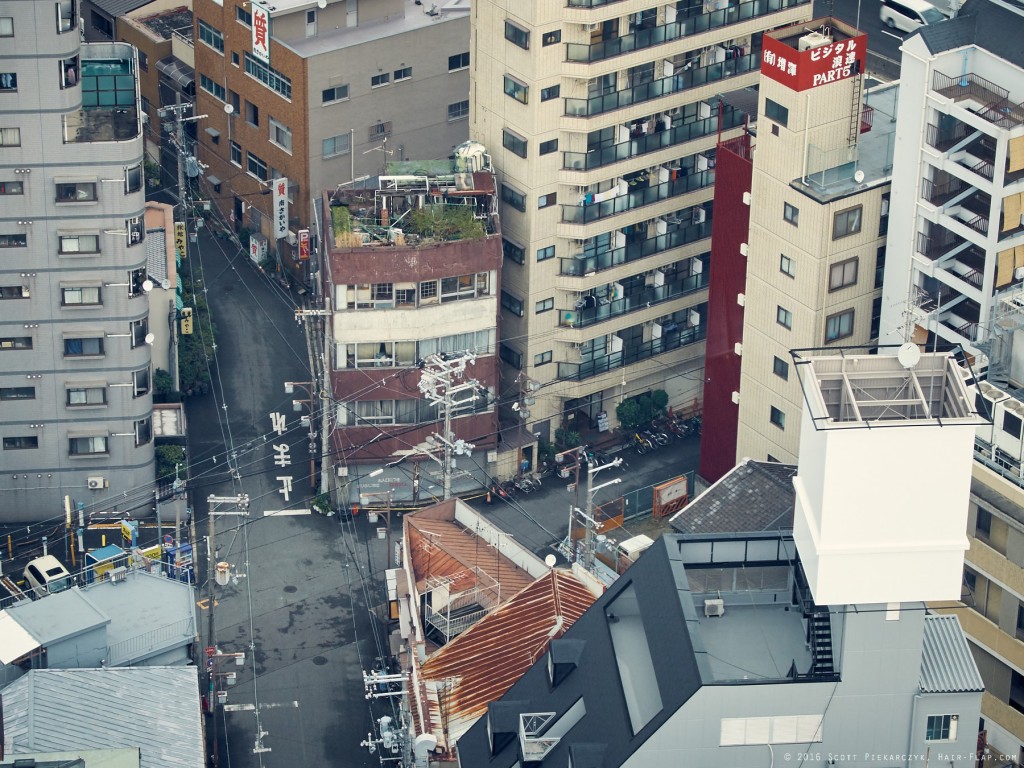 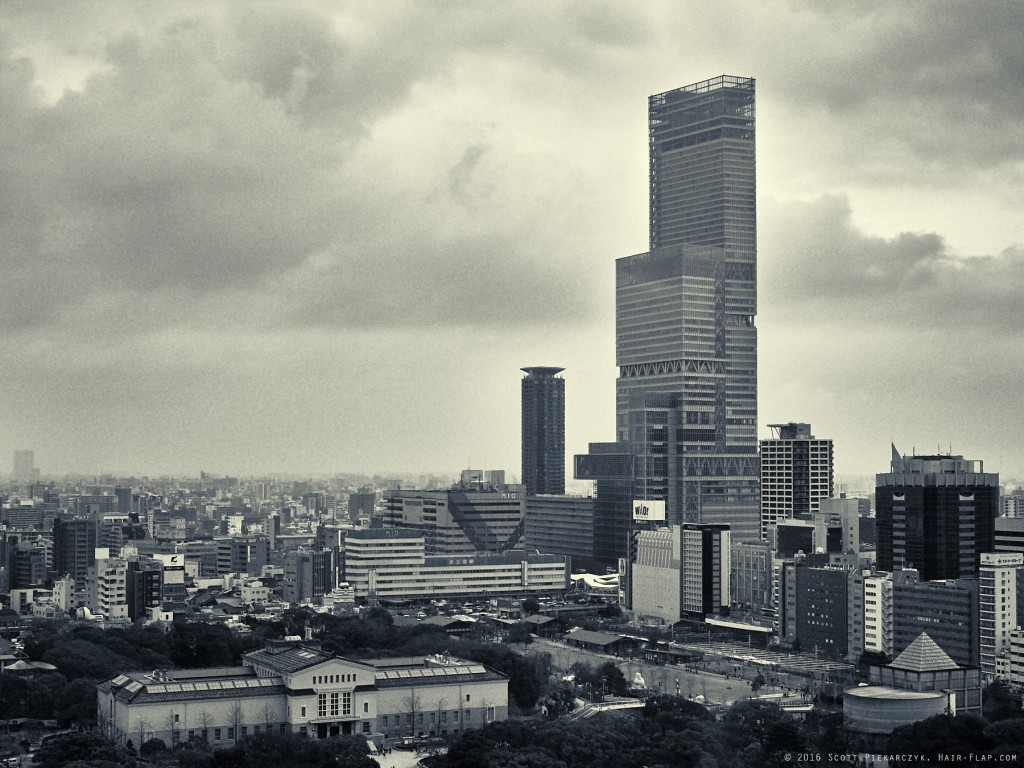 This building is called Abeno Harukas and is the tallest, non-tower building in Japan (300m). It was weird to be up in the observation tower and still have to look up at this building the next neighborhood over. I’ll definitely be checking out their observation deck in the coming months. 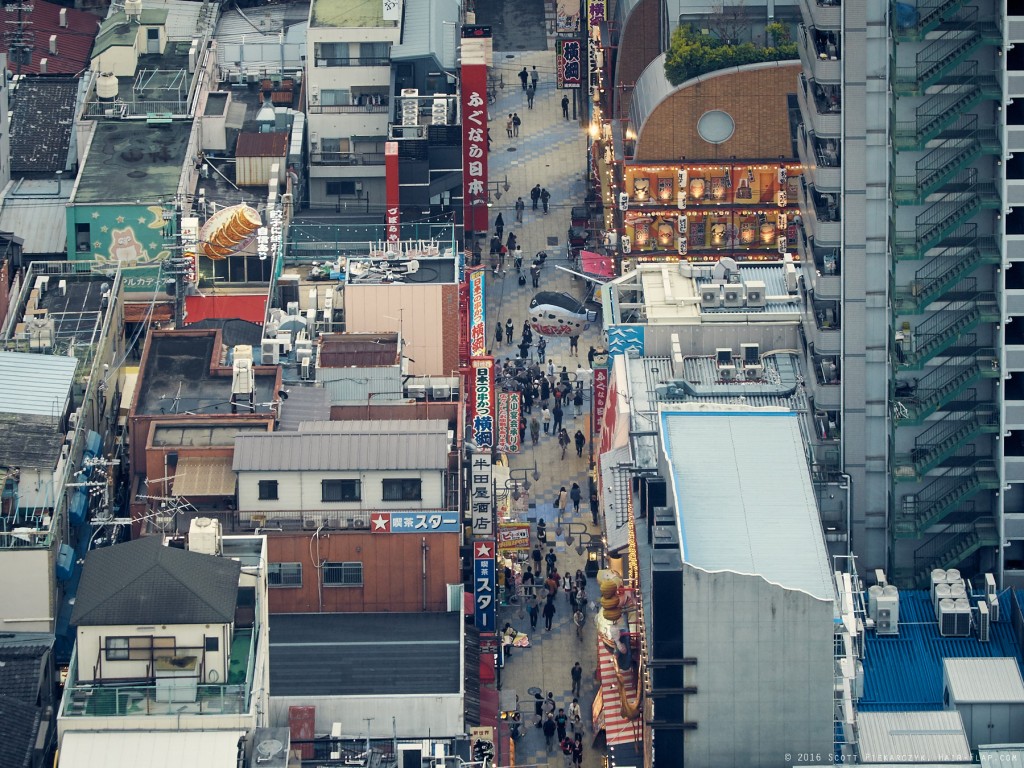 Some of the restaurants below in the Shinsekai area. We had a bite and some beers afterward and chatted with some locals. You know, S.O.P. for these parts.

I also got this neato shot of the custom street lights in this area along with a rising moon that you can actually see terrain in if you look closely. 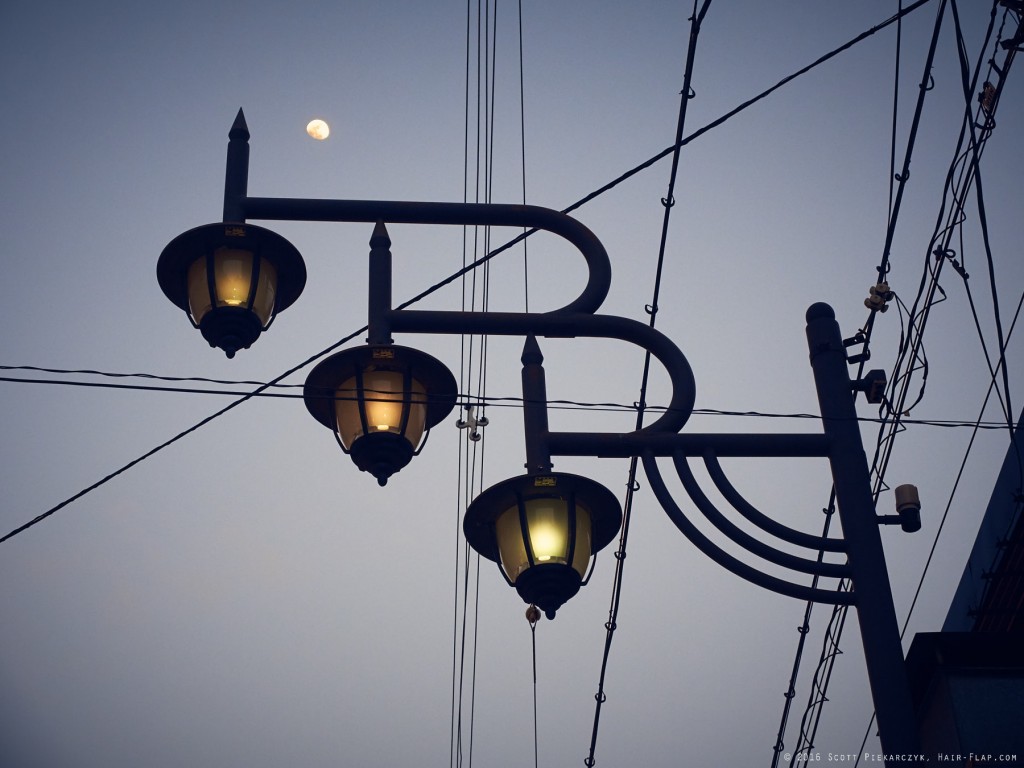 It still felt like I should do more than just one vantage point for this post though, so the following day I ventured into our apartment building’s elevator and went up to the 8th floor roof. There was a chainlink fence blocking most of the view but it sure did make my acrophobic ass feel safe so it’s hard to be too cross. 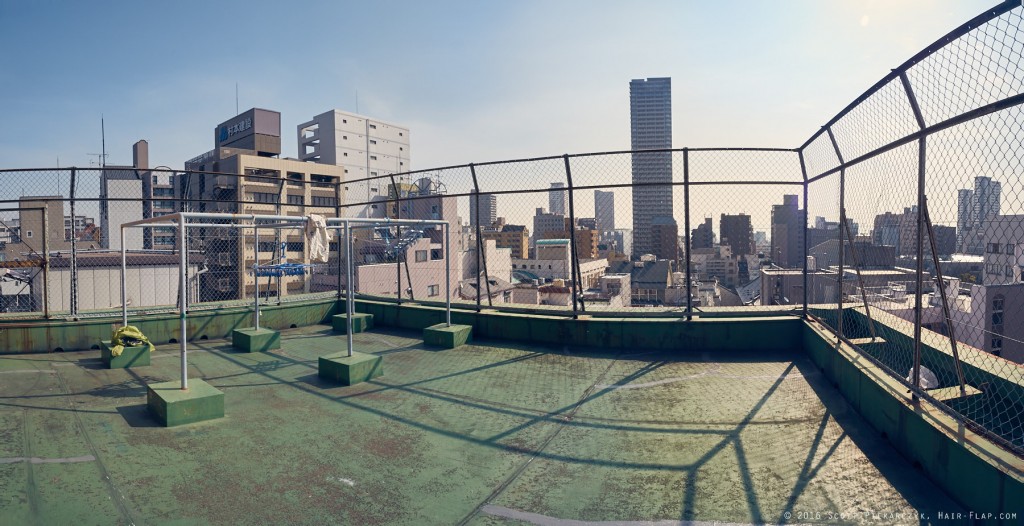 There were some workers up there resealing parts of the roof, and to my surprise there’s actually a little vegetable garden being maintained, I assume by our awesome landlord, Yoshida-san. I’ll have to ask him about it next time I see him. 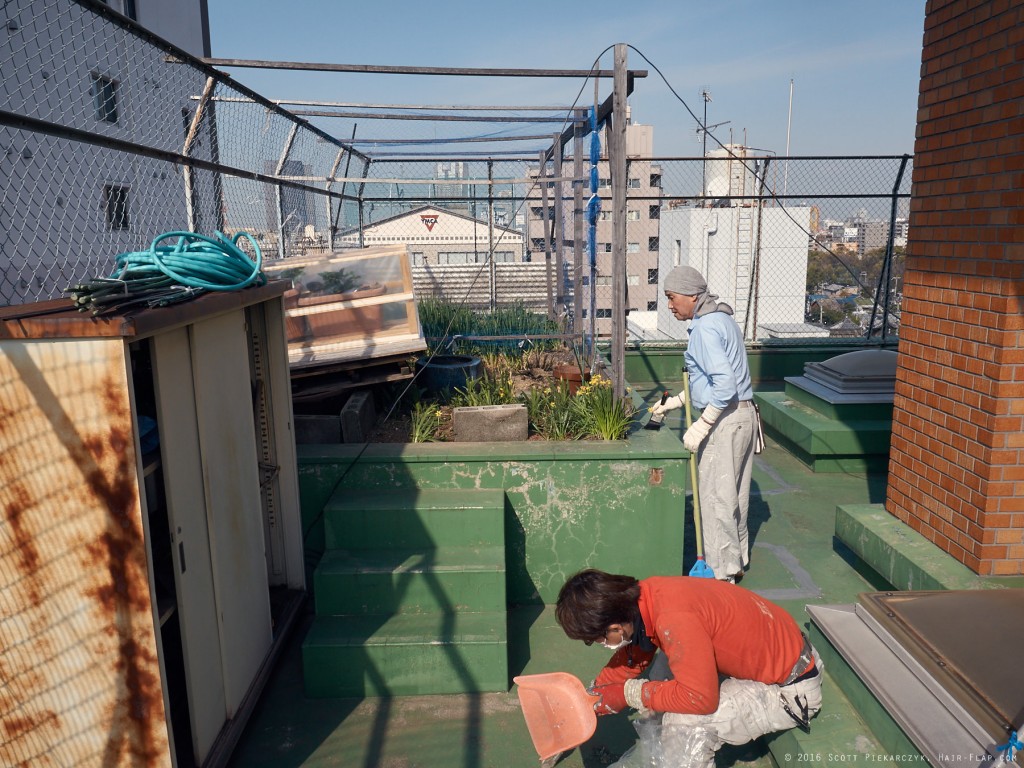 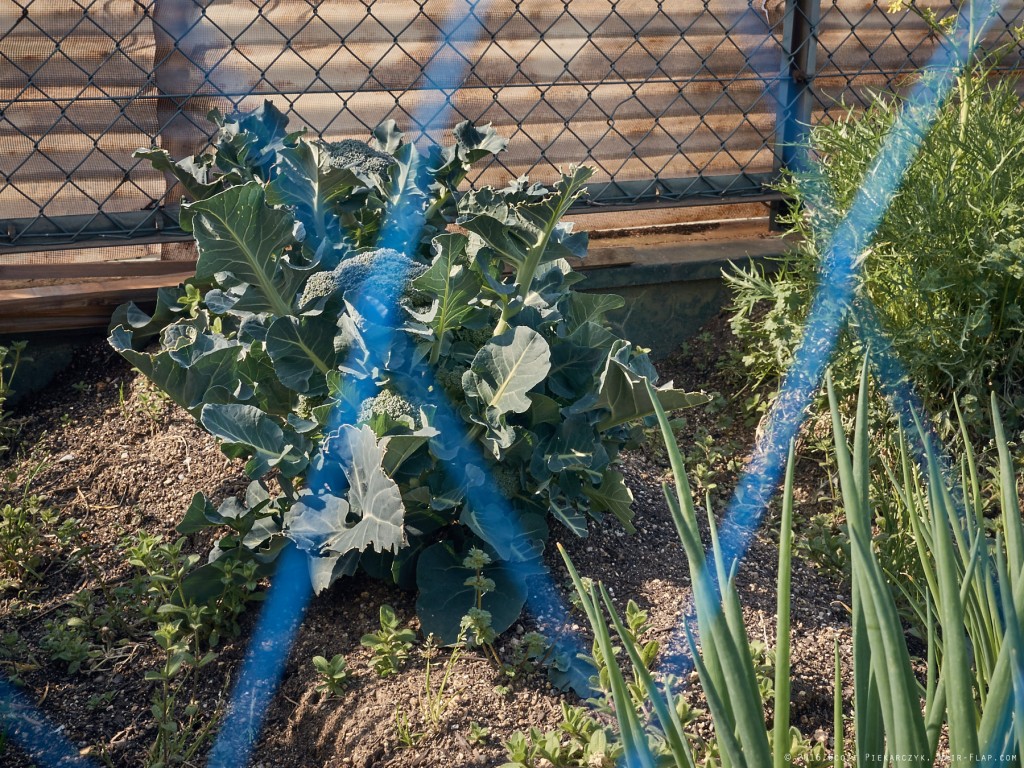 Hm, looks like the neighbor-building has a roof garden of some kind too. 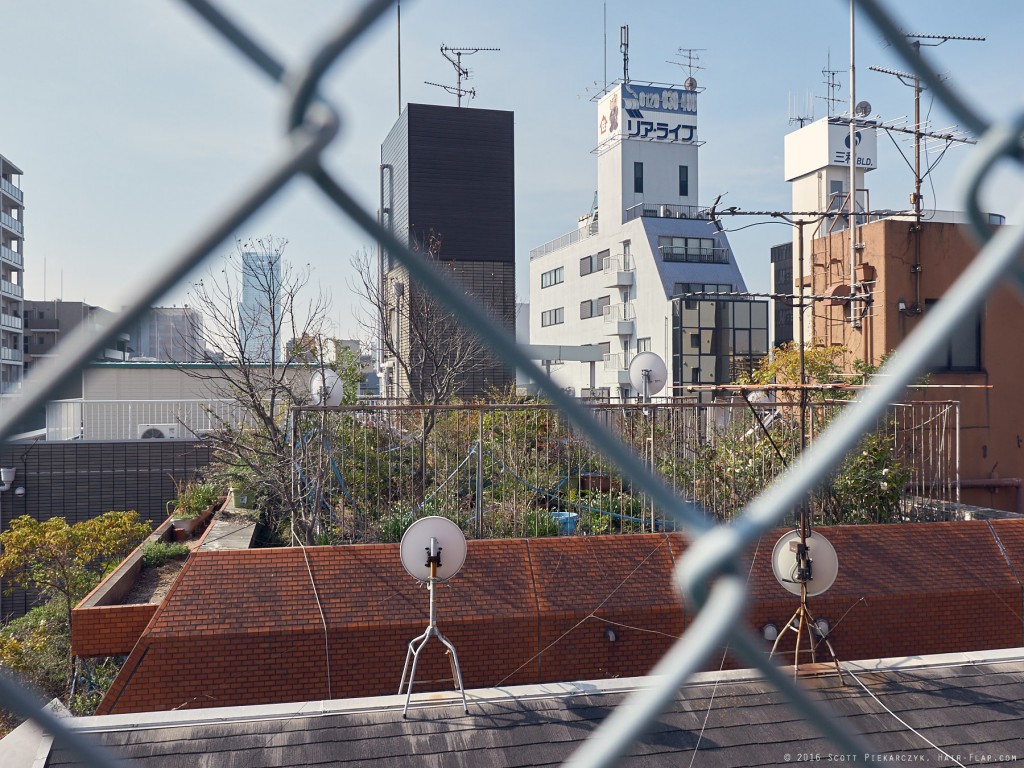 I really wanted to try and get a shot or two without the chainlink though, so after some checking, I came across the service stairs that went up to the top of the elevator shaft. Remember, I’m severely terrified of heights, but that’s how much I love you, dear readers. I’m willing to risk the unsoiled status of my shorts to bring you the best in Japan imagery. And it paid off, there were some terrific views that made the sinking feeling in my stomach totally worth it. 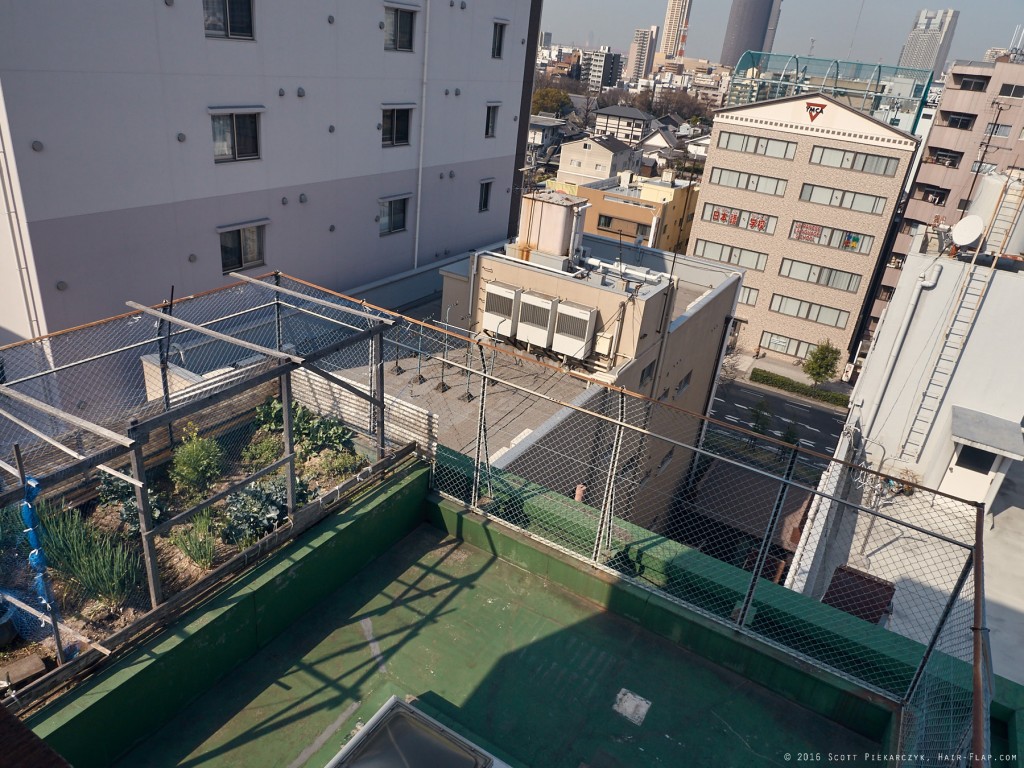 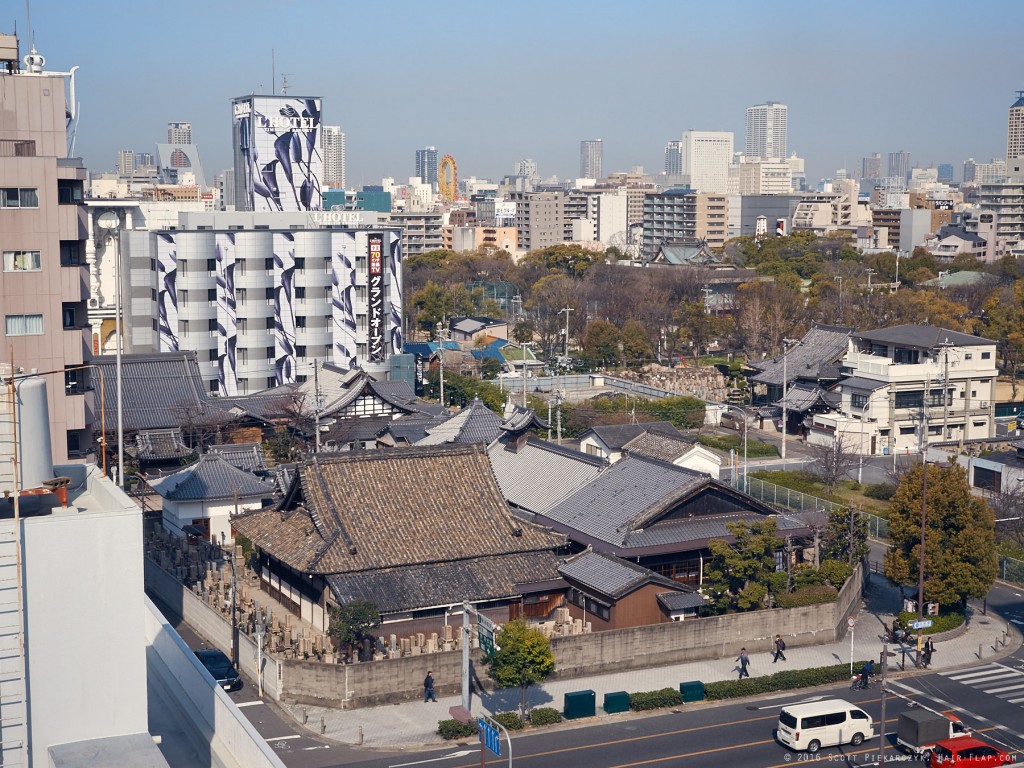 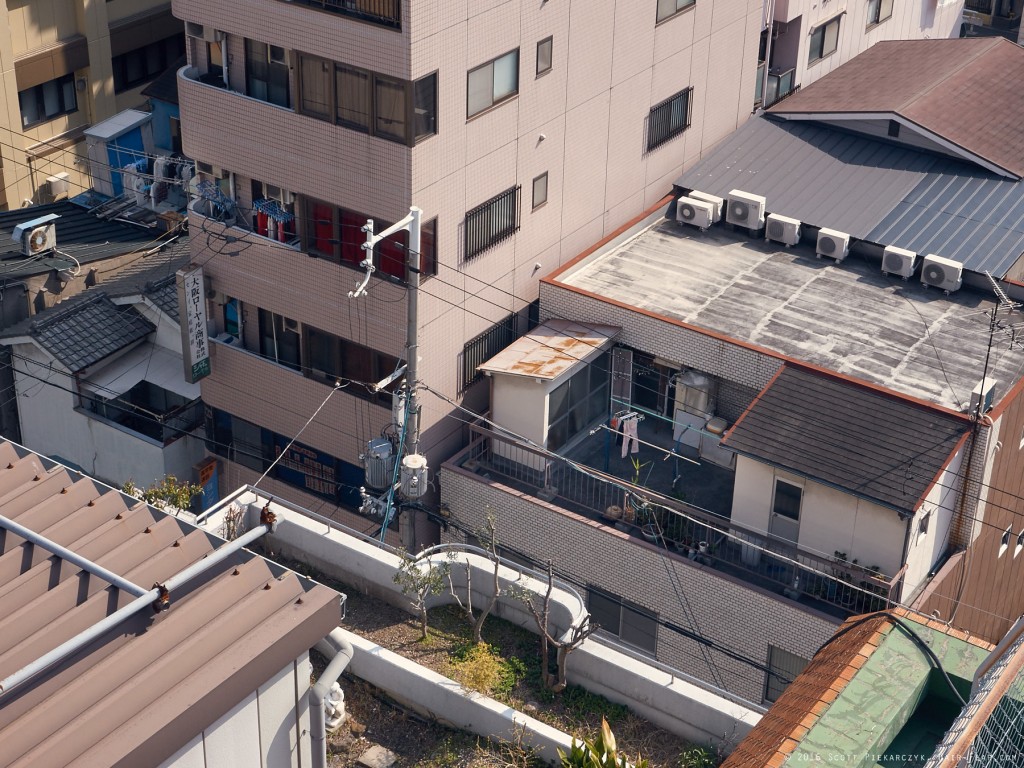 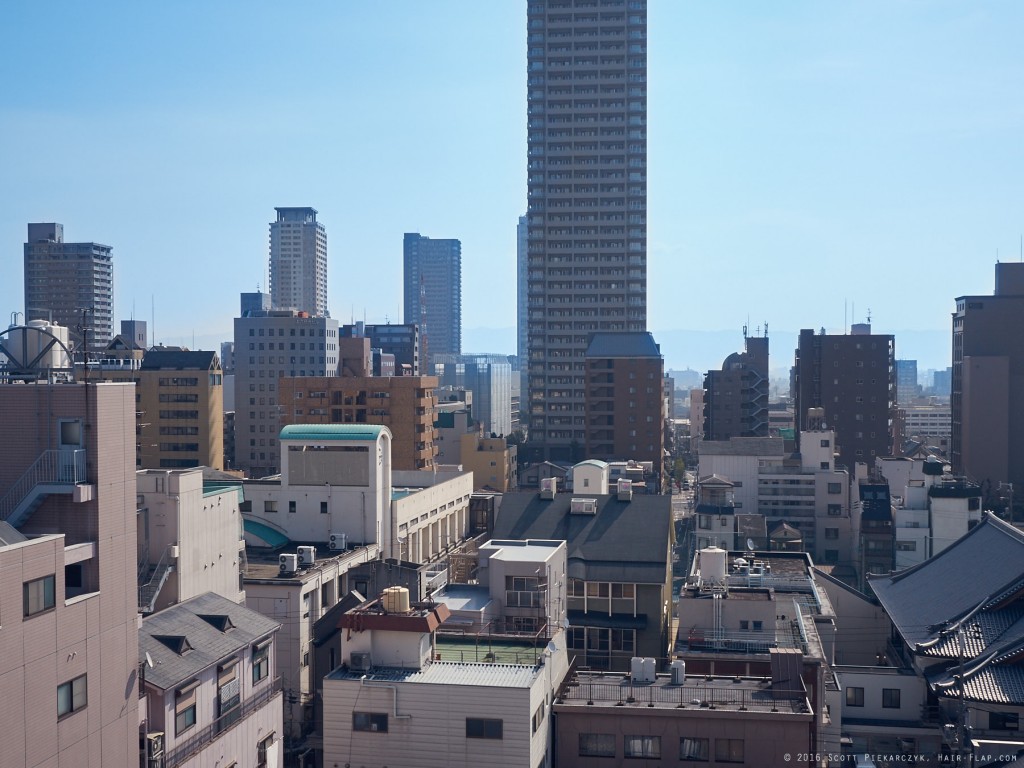 And this is where I’ll leave you for now, looking out across the great oceanic metropolis of Osaka, feeling it’s majesty and wondering in the back of your head, if after this death-defying ascent, my shorts remained unsoiled.