An 1800’s–Era Village… in an Office Building 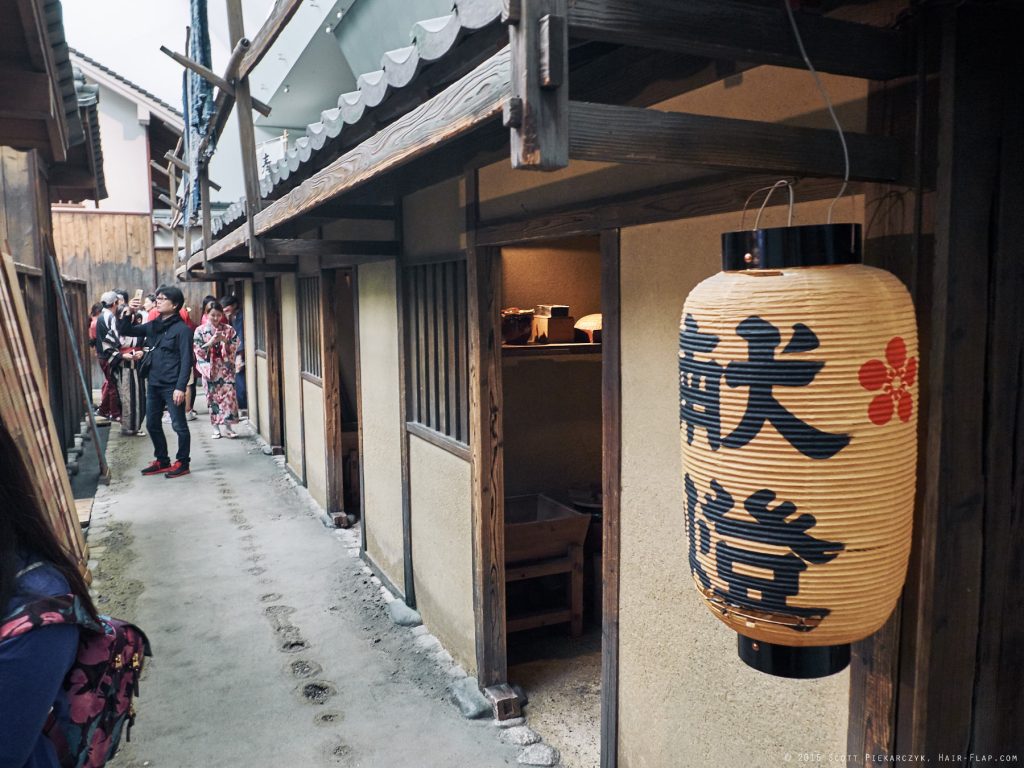 I’m not a big museum guy. I wish I were. I certainly enjoy learning and think it’s important to see items of significance in person to help make the relevance of history come alive, but most of the time the experience is so static that it’s tough for me to get into it. Maybe I just have ADHD Lite™.

But I was intrigued about the idea of visiting Osaka’s Museum of Housing and Living (大阪くらしの今昔館) for a couple reasons. First, I really enjoy architecture in general and living spaces in particular. There’s something fascinating about how people organize the spaces they inhabit based on cultures, locations and personalities. Second, this particular museum recreated a couple of “typical” Osaka streets from late in the Edo Period (1603-1867) complete with buildings and interiors all built with materials and methods that were in use at the time.

Here’s the kicker: this “village” is on the 8th floor of a damn office building. 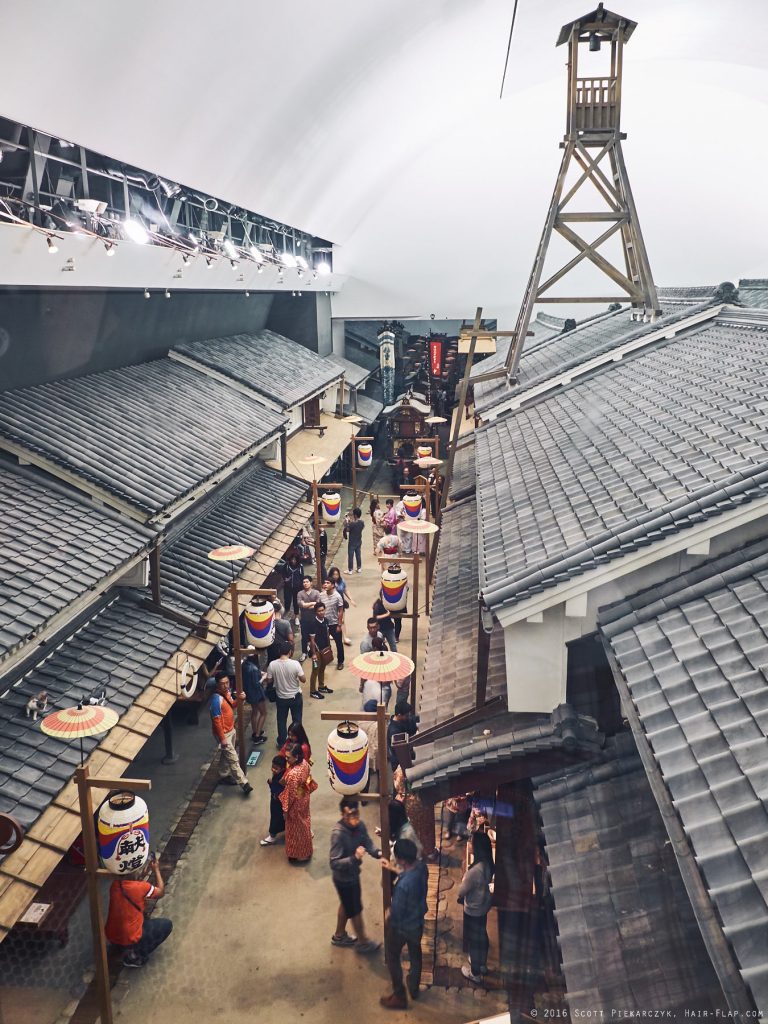 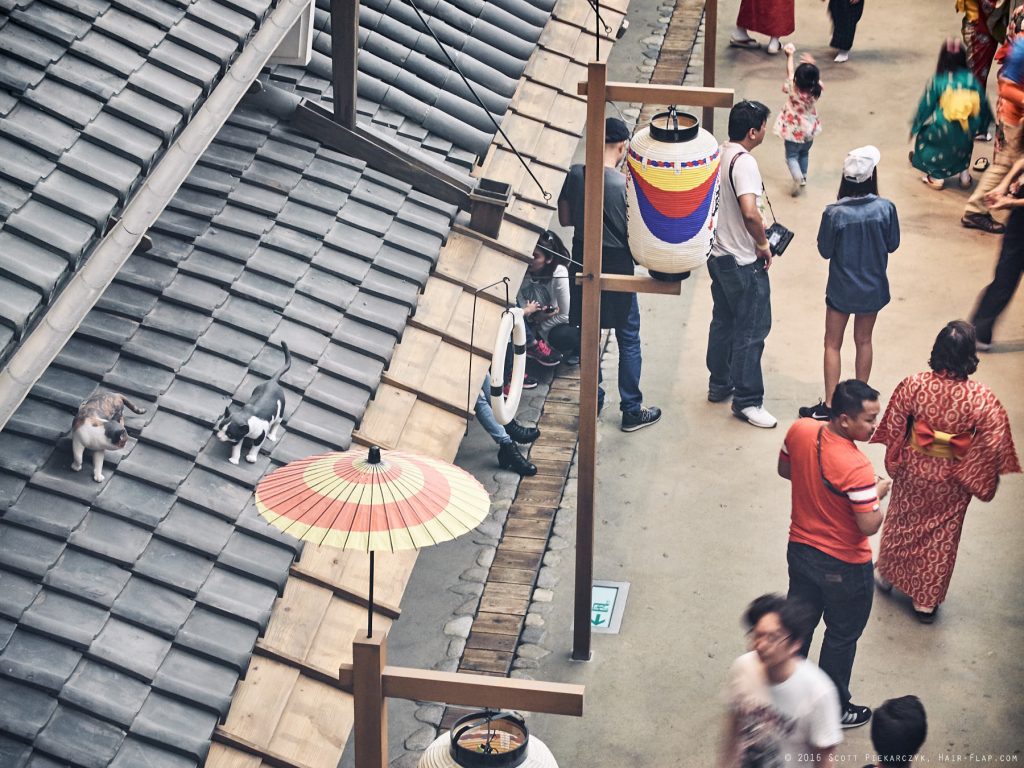 The interior feels a bit like an airplane hangar. It’s probably about two stories high with a cylindrical ceiling that cycles lighting patterns through various times of day; Day, Night, Rain w/thunder & lighting. I didn’t really succeed in capturing the feel in a photo but the sunset lighting, in particular, was uncanny. With the sound of crickets in the distance and the warm, low light coming from…. somewhere over there, I could swear I was outside at dusk and not in a skyscraper in the middle of the day. 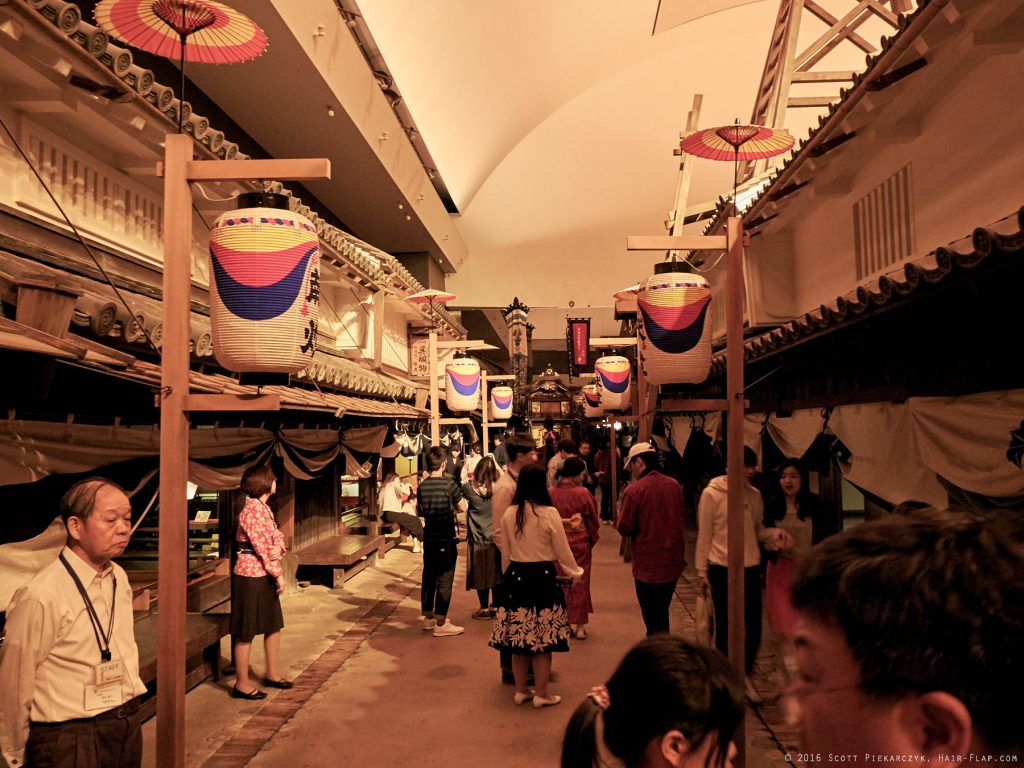 And once the “sun” went all the way down, the festival lanterns lit up and a little fireworks show was projected on the “sky.” How fun is that?! (You’ll have to forgive the quality of these photos, as usual I unwittingly brought the worst camera possible for this low-light situation.) 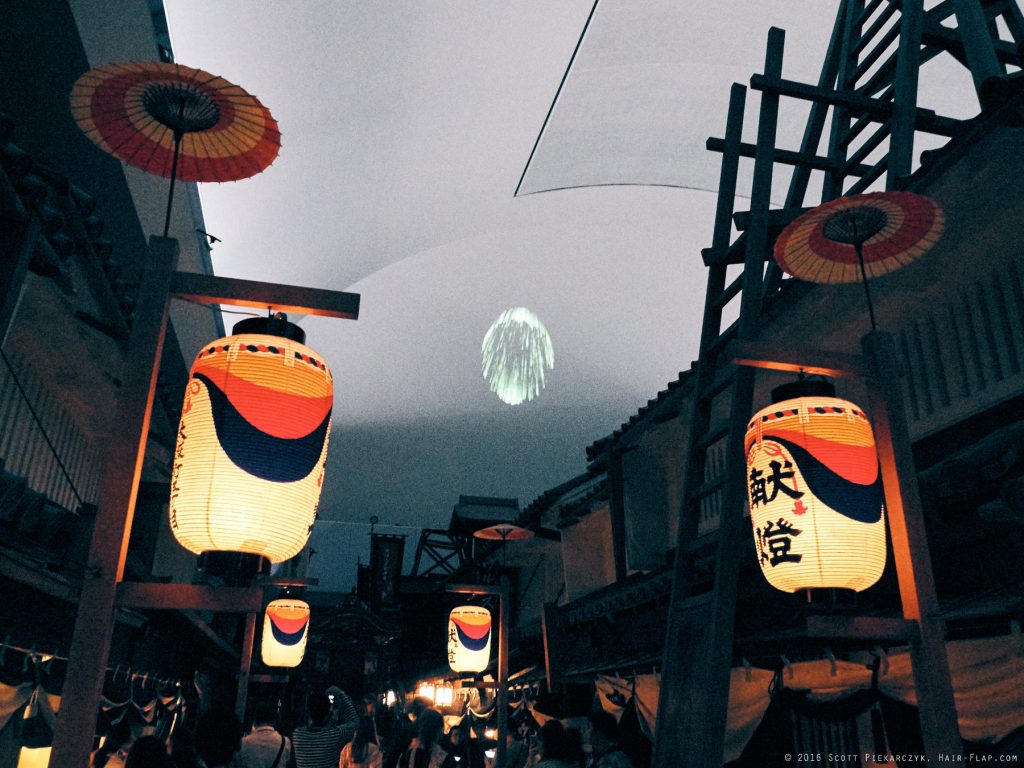 For around ¥400 you can get fitted in a kimono and wander the streets in period garb. We didn’t do it this time but enough people do that it adds to the overall atmosphere in a fun way, though there’s a bit of anachronistic spice as kimono-clad citizens stop to snap selfies in front of the scenery. For ¥100 you can rent an audio guide with English explanations of various points of interest, which is a good idea unless you’re pretty fluent in Japanese. I definitely got a lot of neat tidbits from the guide that I would have missed out on otherwise. 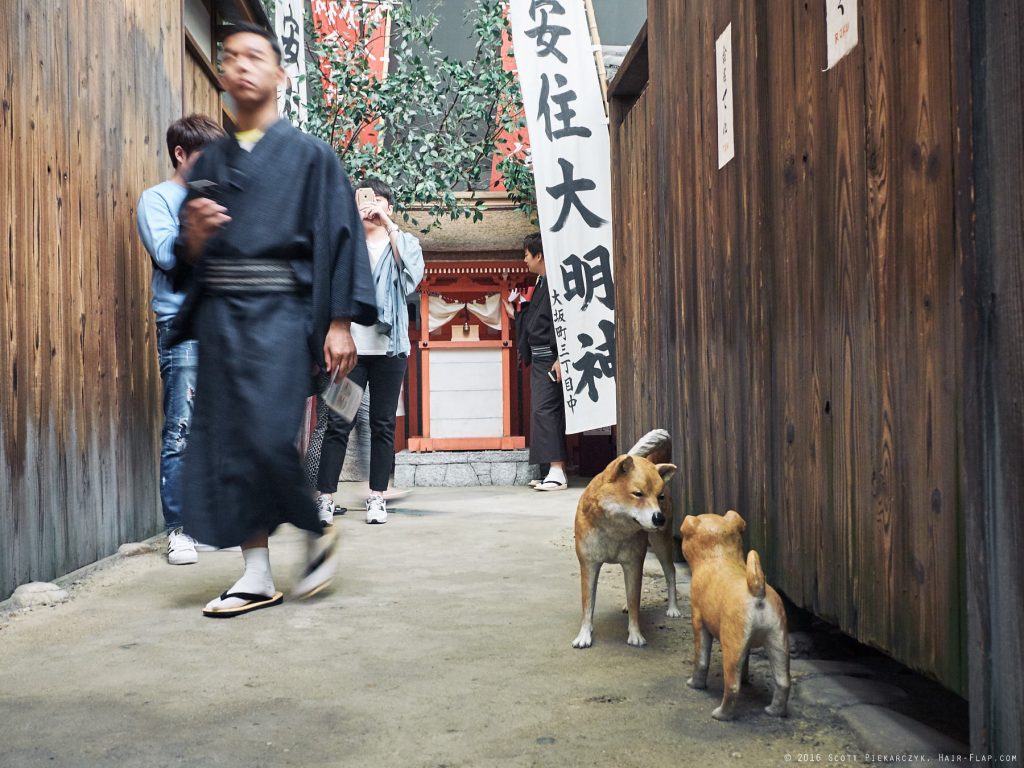 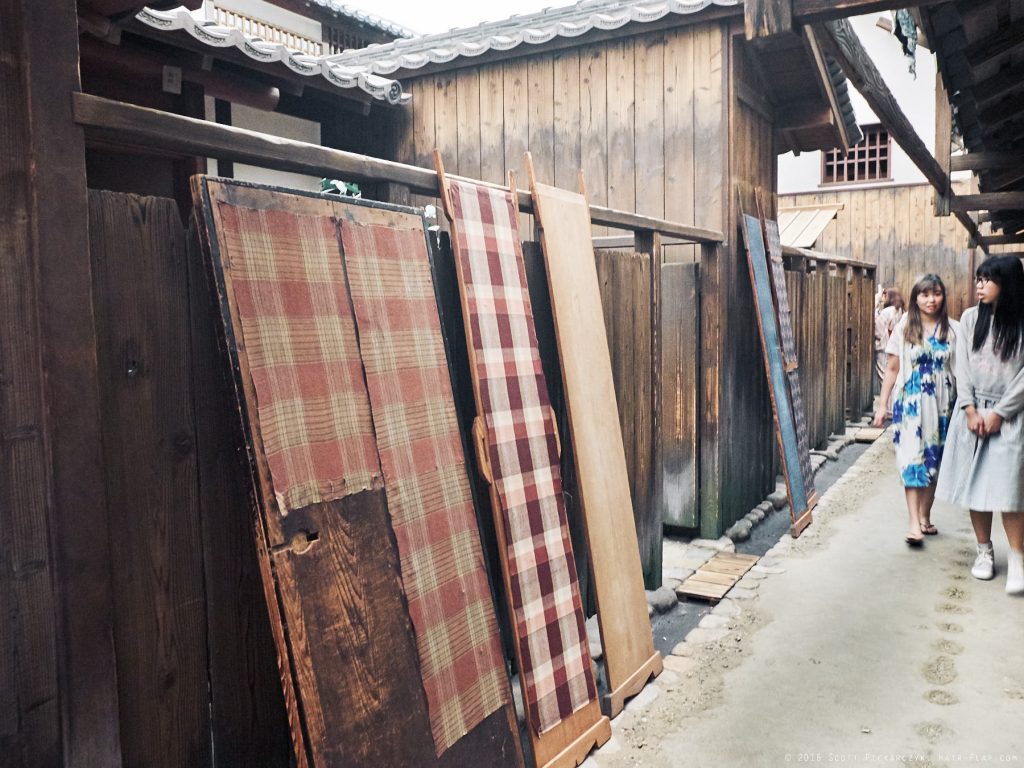 For example, this ‘For Rent’ sign on a vacant room in a housing building. Apparently, in other parts of Japan they were usually hung straight up and down but in Osaka are usually attached at an angle like you see here. Why? I don’t know, but it’s an interesting detail, dammit! 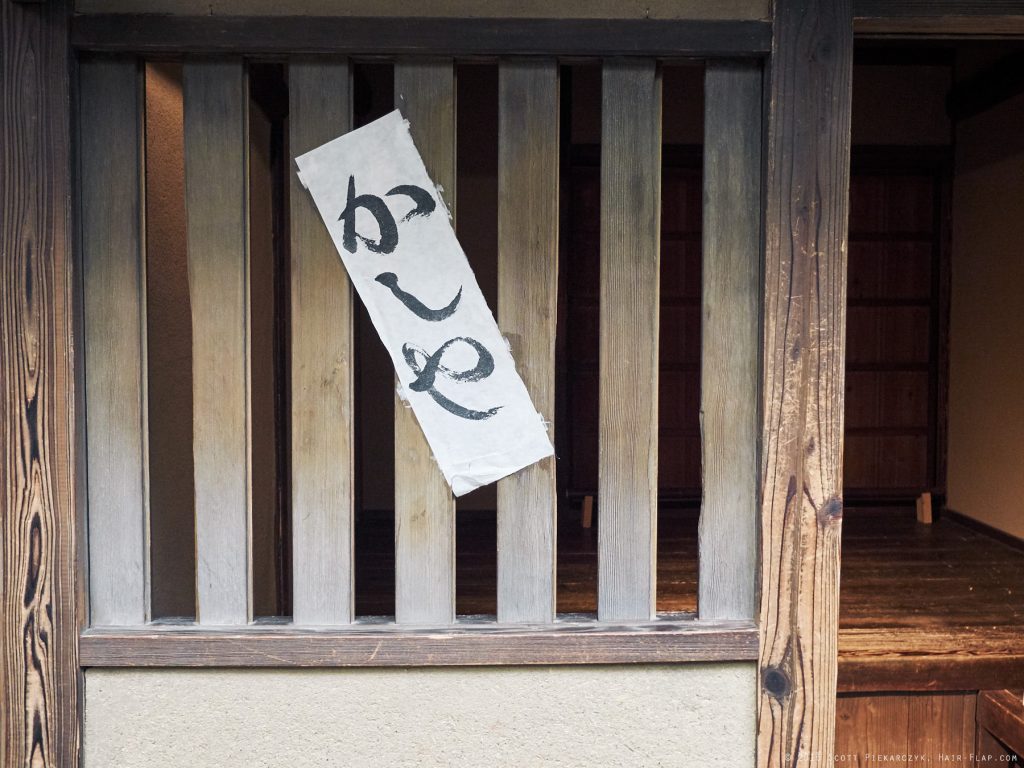 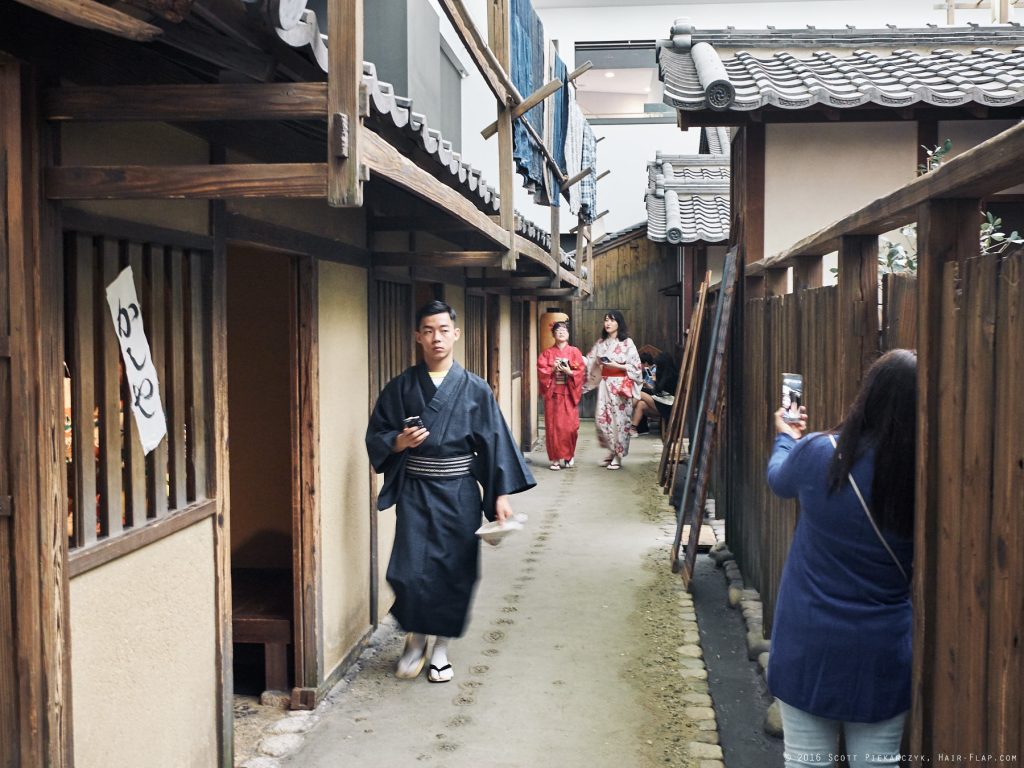 After exiting the village, on the lower floor of the museum are a few miniature scenes recreating specific neighborhoods of Osaka at times since the Meji Period (1868-1912). 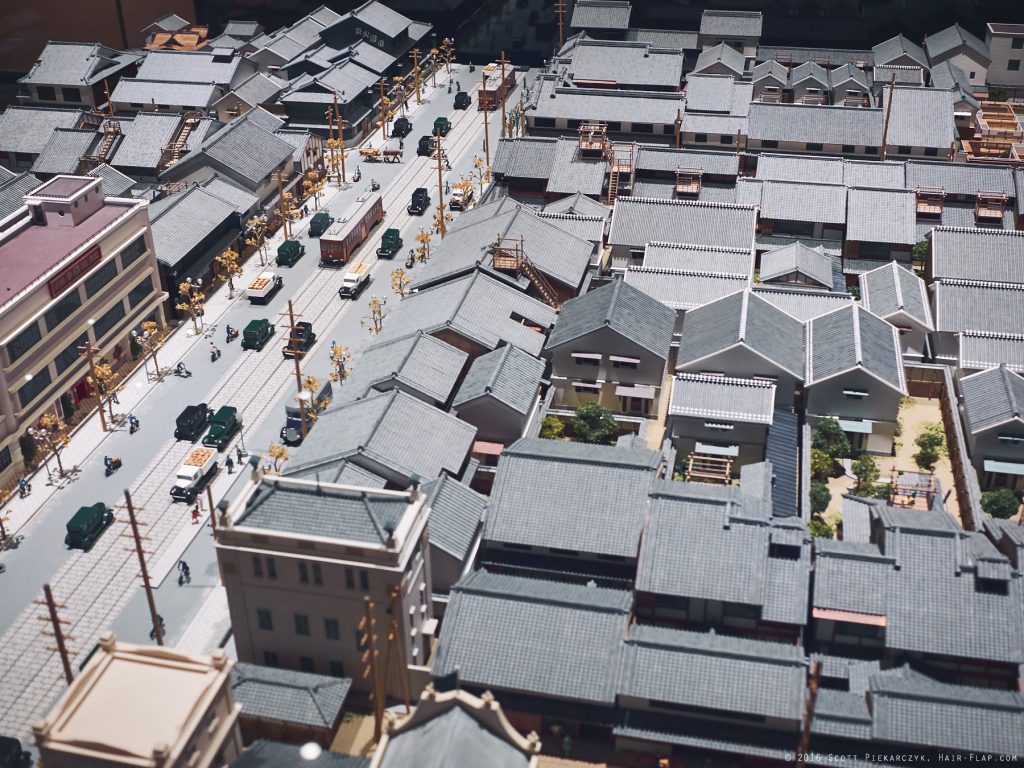 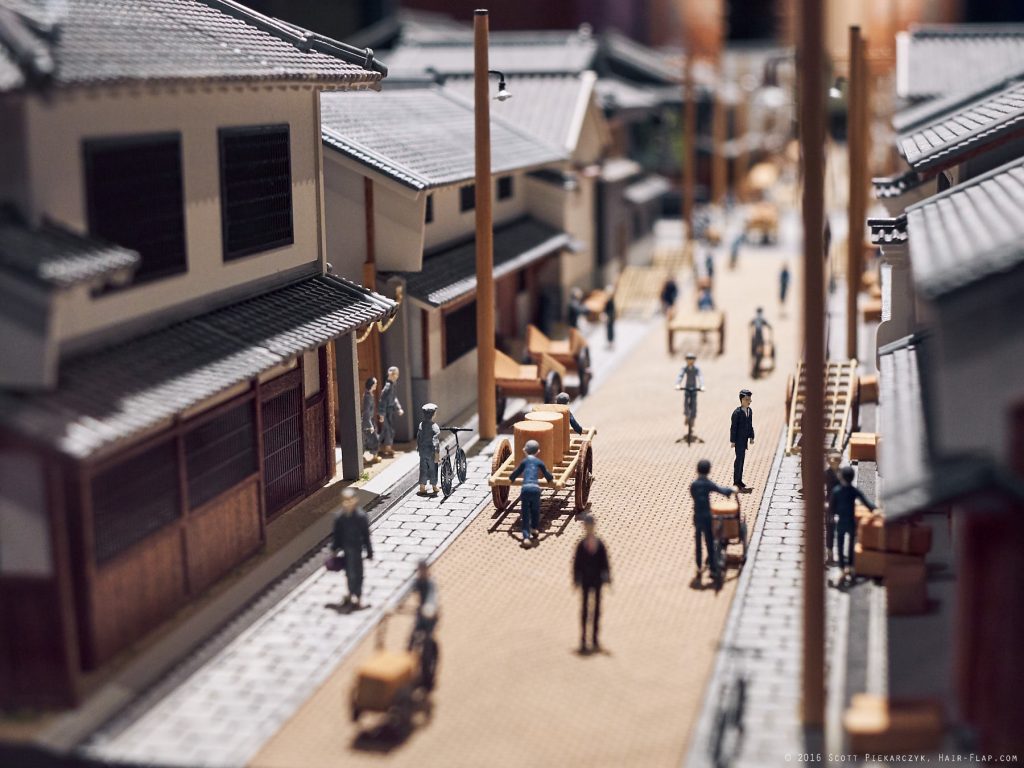 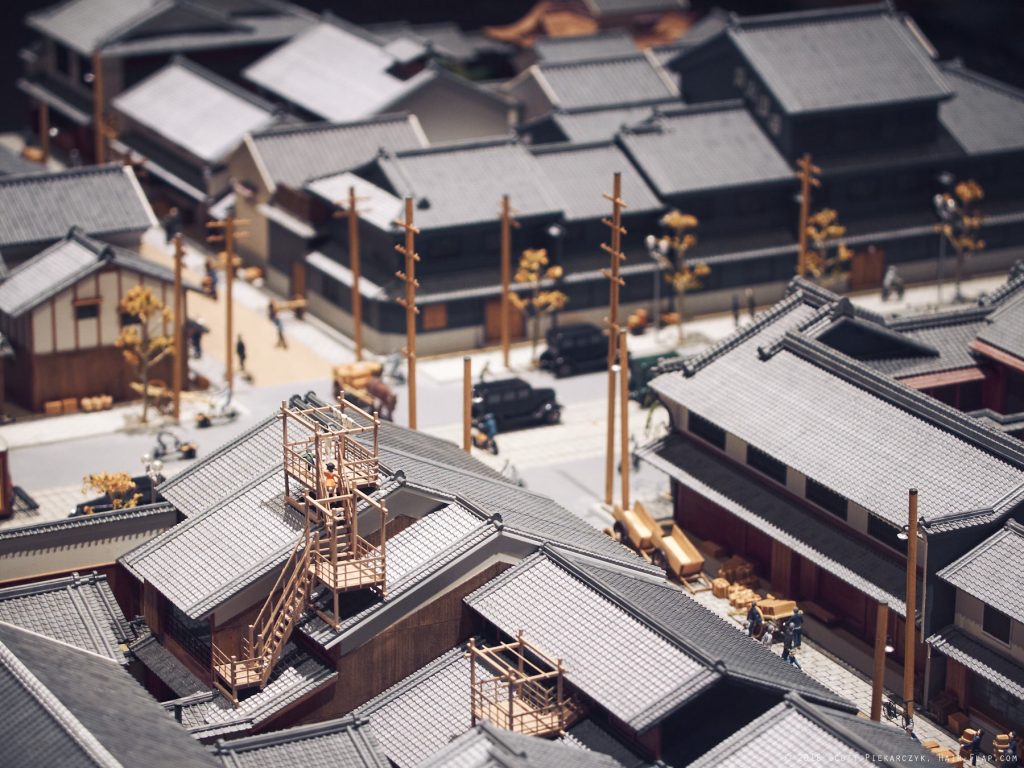 I was particularly fascinated by one depicting the “Shirokita Bus Settlement” which apparently sprung up after the war to help deal with the housing shortages after so many bombings. Repurposed charcoal-powered(!) buses were set up in circles around a central cooking/restroom building. 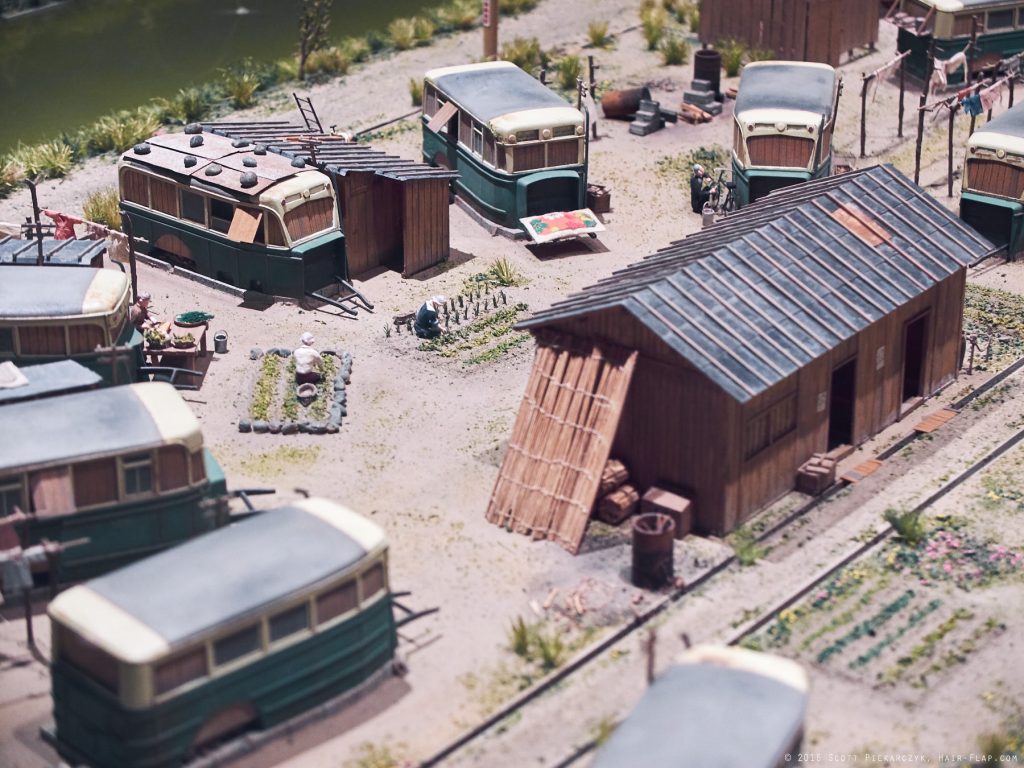 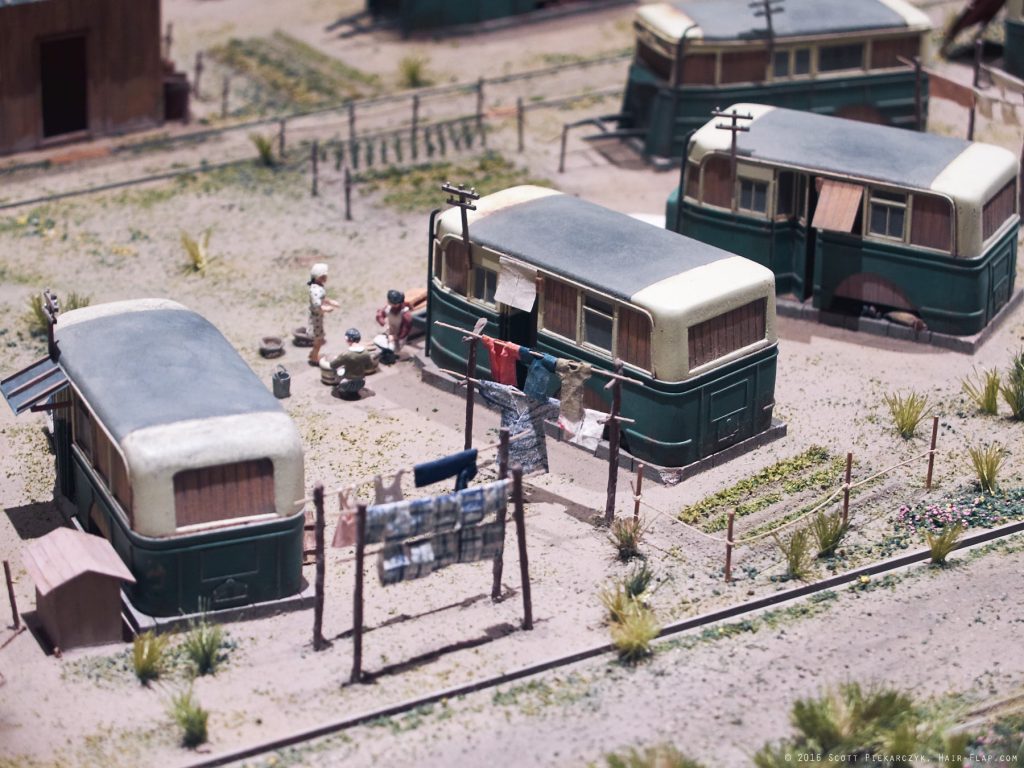 Strangely, after some casual googling, I’m unable to come up with too much more information on the settlement itself. I could only find these two photos (1, 2) and everything else was regarding the museum, though that might be more to do with my limited Japanese language skills than anything. 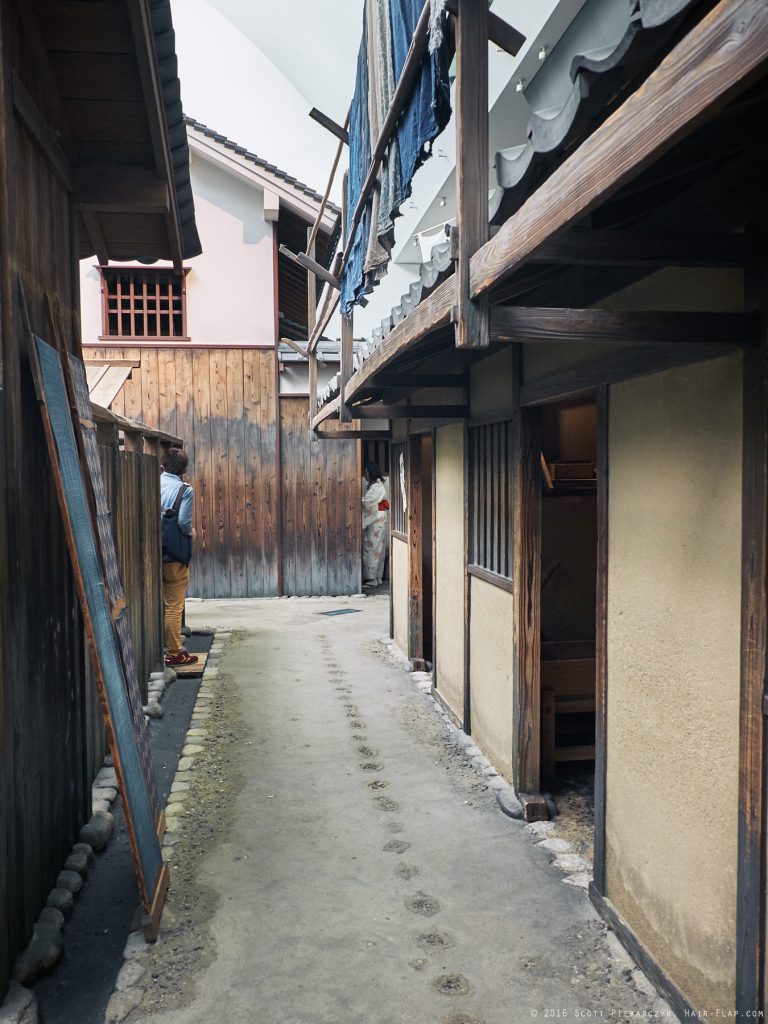 In any case, this museum is fantastic if for no other reason that it offers more than simply gazing at objects trapped behind glass. It doesn’t even matter so much that these aren’t the actual buildings or streets, that’s almost besides the point. The true subjects of interest are the techniques used to create the spaces that people actually lived in hundreds of years ago. Fortunately, space doesn’t need to be locked down and protected from the public. In fact, it’s valueless unless someone actually experiences it, which is exactly what this museum invites you to do. That’s the kind of historical engagement I can get behind.