I Told You, Don’t Call Me Eugene! 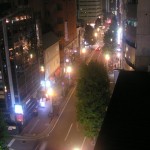 I’ve had quite a few people blasting me via email and IM’s asking where the hell I’ve been lately and why the hell I’ve not been updating. Well, I’ve been here at school, with classes cancelled for the most of the week, internet down while they supposedly upgrade the connection, and until today was sick as poo and filling up entire tissues with viscous nose-goo, one after another. Yes, my life is a carnival of pain.

Truth be told, I’ve also had an adorable little distraction which has been holding much of my attention as of late. You’ll probably remember my mention of OCJG (Offensively Cute Japanese Girl), and I’m pleased to chime in with news that things are going very well with her. So well in fact, that you might even get to learn her name soon, a privilege you were never afforded with Romanian Girl (anonymity is no less than she deserves for ripping my heart out my ass, blasting it into a thousand pieces, before microwaving said pieces on high for a week and proceeding to spread the smoldering ashes around the ground and…… oop, there’s other people reading this, aren’t there? ahem).

Since I don’t have a lot to say at the moment as we head into the weekend, I’ll mention something I’ve been meaning to share for quite a while now. As you may already know, Japanese bureaucracy just loves to waste money on all kinds of worthless projects-for-show that accomplish absolute fuck-all, yet make the people spending tax-yen feel like they’re actually accomplishing something. <cough>jetprogramme<cough>

Sadly Fukuma is no exception to this burning of perfectly good money on entirely dubious aims <cough>jetprogramme<cough>, and the following is a great example. Apparently a few years back, some people in the town office, thought it would be just jim-dandy if Fukuma had it’s own song. So, instead of finding some local talent to volunteer, or even be hired, to make some authentic “music of the people of Fukuma”, they hired some well-known singer, probably from Tokyo, to record a song for around $5000.

And what do they use this investment for? I’ve heard it used in three instances in my 2 1/2 years here: over the speakers in the town office when it’s time to go home at 5pm, over the speakers at school when it’s time to go home at 5pm, and as the hold music on the phones at the town office. Fukuma must be thrilled that it can’t afford for the sanitation department to pick up recycling (instead it’s done ONCE A FUCKING MONTH, by local volunteers, at 7am on Sunday morning!!), yet it has a spare five-large to drop on bullshit like this. <sigh> Are my 3rd Year JET Blues showing their colors yet? 😛

Anyway, if you’d like to give a listen to it, since I guess it’s not THAT bad of a folksy tune, feel free to take a listen down below or via the link in the navigation pane, where I’ve also made available the Fukuma Town Guide, made almost entirely by yours truly (except for one page that Fletcher slaved over for like 10 whole minutes).

(Scan of the Lyrics are here.)

And finally, our corrections-and-apologies editor (a.k.a. me) has once again notified me of a boo-boo in search of a remedy. If you’ll remember not too long ago I retold the story of an enjoyable evening with the venerable Towa Tei, at which I actually managed to get a picture of myself with Towa himself, along with a “random fucknut” who jumped into the picture.

Now, I wasn’t all that terribly upset that I had to share my photo with someone else (it was a jumpin’ club venue, after all), yet I lambasted this anonymous individual because

a) the word “fucknut” has immeasurable humor value and just kind of makes me laugh, so when the opportunity to use it presents itself, I jump at it.

b) as I said, the individual is anonymous. What are the odds he’ll EVER see this page and find me lambasting him? (lambasting is another one of those words I love that I just don’t get to use often enough)

I received an email the other night from said individual and it turns out that his name is not, in fact, Random Fucknut, but is actually Craig. He’s a terribly good sport and even went so far as to apologize for jumping in my photo even after I lambasted him on the site (that’s four “lambast”s in todays entry. Oooooo, five now!).

So let me say sorry, Craig and on the occasion that you jump in another photo that I’m thinking of using on the site, I promise you will not be lambasted as a fucknut. (Six!! Bada-bing!)