Fukuma is a Winter Wonderland 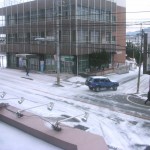 Holy smokes, has it been cold lately! Like really cold. Like due the wonderful insulation in this flat, I’ve had to have both my electric air conditioner/heater and kerosene stove going full blast to stay moderately warm. And in a Kyushyu First for me, we got snow!! Like it actually fell (sideways I might add) and stuck.

I’m honestly surprised that they didn’t call off school for that day given that there was snow on the roads. Not that it was all that slick, but snow has a way of turning people into drooling retards thus robbing them of any capacity to drive. Scattered snow on the road sans ice is no reason to go 3 miles an hour, thankyouverymuch. I was passing car after car on my bike because everyone was going so damn slow. Fools. 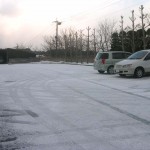 The first day of snow sucked because I had to ride to work while it was falling in what seemed like arctic winds. And of course, do arctic winds ever blow in any direction besides the direct opposite in which you’re traveling? Scotty was very cold. 🙁 Turns out I was the trooper of the bunch though since I was at school on time like always, but the parking lot, usually full to the last space, was mostly barren. About 8 other teachers were there in the morning, there’s usually 38. Yikes. 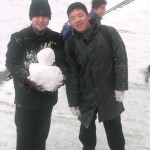 The second day was just as cold, but at least it wasn’t snowing, and it was actually kinda pretty in a “Hi-how-are-you-I’m-dying-of-frostbite” kind of way. The kids at school were, as per their designated social behavior as kids, having yuki-gassen (snowball fights), and making little snowmen. I learned that the Japanese version of a snowman, isn’t a snowman in it’s own right like back home, but instead a snow-version of a daruma, a traditional doll supposed to bring luck in wishes or attaining goals. Which is why a snowman in Japan has two balls instead of three (oh, grow up!) and why they are called yuki-daruma (yuki meaning snow, if you haven’t figured it out already). Took me a while to learn that one, but I guess that’s not surprising considering I live somewhere that doesn’t see much snow.