Feast Your Eyes on the Sporttime Chicken™

So I’m back from my trip to Korea. I’m STILL sorting through all the pics actually. Between this site and my .mac photo galleries, there’s going to be roughly a metric shitton of photos. ^_^ It’s taking me a while to resize and color correct these babies though, so while I’m prepping those, I have to tell you about the discovery I made during the last ten minutes of work today.

This week is boredom overload since there are no classes and everyone is practicing for all the silly presentations they’re going to perform during my old nemesis, Taikusai (Sports Day). Today was particularly brutal since it was raining outside so the students couldn’t practice their marching routines in the field, so they were all in the gym where they practiced their group songs. So imagine an echo-y gym, with five groups of about 60 kids each, each singing a different song, at the top of their lungs, AT THE SAME BLOODY TIME!! It felt like someone ripped my ears off, put them in a blender and jammed the blender into my ear canals. 🙁 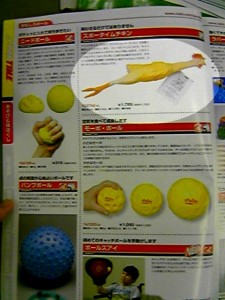 So later on, I’m sitting in the teacher’s room, just waiting to get the hell out of this torture-fest for the day and I notice a sports equipment catalog on the couch. Having a few idle minutes, I picked it up and started to thumb through it. Nothing could prepare me for seeing… the Sportime Chicken™.

Yes, I have photos (cel phone photos, sorry for the graniness), because I knew you would never believe me if I simply told you that a rubber fucking chicken was in a wholesale sporting goods catalog. After my laughter died down and I picked myself up off the floor, I did what I knew I shouldn’t as far as my sanity is concerned and read the description. I offer now, my translation of the description for the Sportime Chicken™:

Launch it high into the sky with the Flingnet(p.57) or Parachute(p.10). You can even use it as a relay baton. Or instead of a game of catchball you can play a game of “Catchchicken”. It’s unique design will leave people laughing with a strong impression. To combine this curious chicken with curious activities is the aim of the Sportime Chicken™. 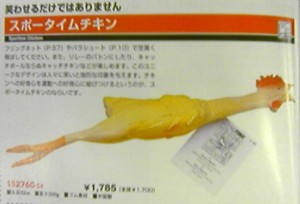 Relay baton!?!? Are you fucking serious? There was another two minutes spent on the floor in hysterical laughter. Catchchicken?? Another five, down the tubes.

I have to admit, as absurd as the Sportime Chicken™ is, hysterical fits of laughter are a nice way to end the day.

One quick aside, later in the book there was a ball-type product called the “Ballzac.” Now maybe I’m just from a weird side of town, but, uhhh….. doesn’t that mean something else?